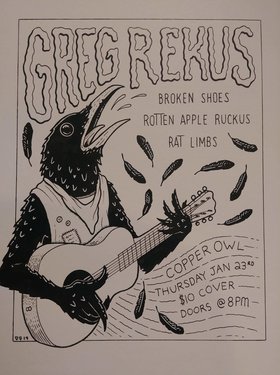 Greg Rekus Returns to Victoria!
This Riot Folk Punker stomps up a storm! Greg Rekus first hit the road as a solo artist in March 2011. Since then, he has played some of the greatest punk music festivals around, including The Fest, Pouzza Fest, and Groezrock Music Festival. He has toured Europe three years in a row from London to Ukraine. He has toured the United States and Canada over ten times. Finally, he has released two full length albums and a 7 inch in several different countries through a network of indie labels. Greg’s Passion for music is bursting at the seams. It is the driving force that keeps him on the road 6-7 months a year and cranking out album after album.
https://greg-rekus.bandcamp.com/
http://www.gregrekus.com/

Broken Shoes:
Dating back to 2010, a man and his guitar found solace in a strange act of music fusion. 10 years later that man’s good friend added a drum beat. Two cool cats from the underworld trying to make it in the big city, playing acoustic like you’ve never heard it before. Those two cats, are Broken Shoes.
https://brokenshoes.bandcamp.com