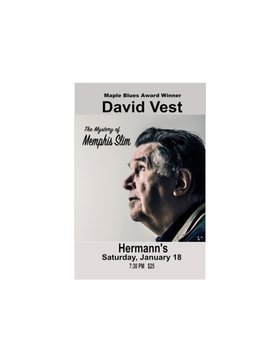 Music: Funk / R&B, Jazz / Blues
If people know only one blues song, most likely it’s Memphis Slim’s classic “Every Day I Have The Blues.” The song has been done by almost every notable blues and jazz performer (and quite a few rockers), and its composer is one of the greatest artists in the history of the blues, a legend among legends. So why don’t we know more about him? DCI Vest and his Blue Detective squad will try to crack the case and unravel the mystery. One thing for sure: they’ll have a good time doing it, and the Eighty-Eights will be thoroughly radiated.

David Vest, a five-time piano player of the year at the Maple Blues Awards, considers Memphis Slim to be the greatest of all the blues piano players (as well as a great singer and songwriter). David is of course known nearly as much for the stories he uncovers as for his own playing and singing, and he’s a songwriter of the year nominee for his own work.

David Vest Five-time winner of the Maple Blues Award for Piano Player of the Year, kicks off 2020 with a rocking good time! Common naive of Huntsville, Alabama, Dave Vest is a seasoned veteran of Gulf Coast roadhouses and honky-tonks! Let the Good Times Roll!