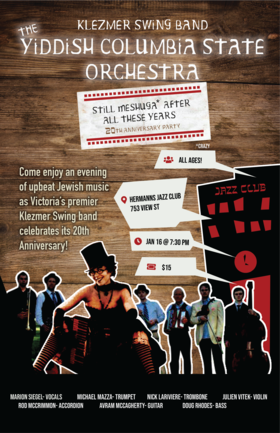 The YCSO owes much of its performance style to the Yiddish musical theater and radio shows that evolved on the lower Eastside of New York to the roughly two million Eastern European Jews who came to the New World in the late 19th and early 20th centuries. Musical theater provided a distraction from the struggles facing the new immigrant. They enjoyed familiar sounds of their homeland but they were also interested in becoming modern and fitting in with their new society. Musicians like Irving Berlin, Dave Tarras and George Gershwin came out of this melting pot.
They blended klezmer with elements of swing and jazz along with the sounds of tin pan alley in the popular music of the day, creating a whole new world of possibilities for the traditional music the Jews brought to North America.