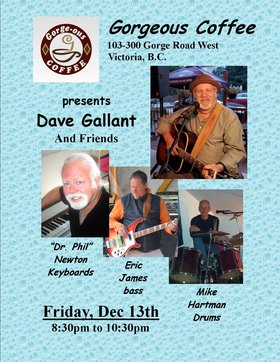 Dave Gallant comes from a musical family. His dad was a fine guitar player and singer and several uncles also played an assortment of instruments from guitar to fiddle and mandolin. The music was mainly country and blue grass with the Celtic flavour of the Maritimes thrown in for good measure.

Dave spent his youth growing up in Montreal during the late 50' and early 60's where he first learned to play Ventures tunes. Soon he was turned on to the rock and roll sounds of Elvis, Jerry Lee Lewis and the Everley Brothers. Then, along came the Beatles and that changed everything inspiring Dave's high school band "The Beatmakers".

During his last year of high school, Dave discovered Bob Dylan and soon was performing in some of the coffee houses around Montreal, most notably the New Penelope where he frequently was one of the "warm up" performers for such legendary folk artists as Richie Havens, Eric Anderson and Tim Buckley.

In the late 60’sDave moved to Canada's west coast. Today Dave lives in Metchosin, just outside Victoria with his new wife. He has been playing in bands and as a solo artist on Vancouver Island since moving here in 1970. Dave also spent a year touring Ontario with the popular club act, Footloose. Over the coarse of his west coast career, Dave has shared stages with Valdy, Bill Henderson, Shari Ulrich, Gary Fjellgaard and many others.

Currently Dave is working with producer, Norm Macpherson recording a CD of his original material with a working title of "Just About There". Dave Gallant is fine singer/songwriter and interpreter of other songwriters' music. He has a rich voice and engaging delivery.

Keyboard player, Phil Newton is CBC recording artist with over 30 years on stage and in the studio. “Dr. Phil” brings the joy of music where ever he goes.

Eric James has been playing bass and guitar for the better part of his life. Currently Eric plays with Group Therapy. He also performs as a duo with his wife Linda and he also manages to find time to sit in with various local musicians.

Mike has been playing drums for more than 30 years in various groups around the Victoria area. Mike was a long time member of the Moon Dogs.