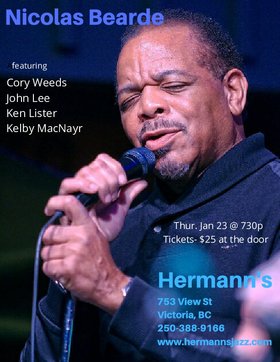 While this engagement marks his Victoria debut at Hermann’s, Nicolas Bearde is an international jazz vocalist ( based in San Francisco), who has won accolades from critics and jazz audiences worldwide
for his “velvet tone” and engaging performances.
His music has been critically acclaimed by Jazziz, Jazz Times, Jazz Week and All About Jazz, and as leader, has performed and/or recorded around the world from Beijing, Switzerland and Moscow, to New York, Paris and Istanbul with such jazz luminaries as Eric Alexander, Mike LeDonne, Vincent Herry, James Carter, Josh Nelson, Nat Adderley Jr and Carl Allen to name a few.

Bearde has recorded 6 solo CD’s, his two most recent 2016 and 2019 releases rising to the Top 20 of the Jazz Week Charts, and his silky baritone sound invites comparisons to Lou Rawls, Billy Eckstine and Marvin Gaye.
He is also the featured vocalist/narrator for the Story of Jazz Orchestra, based in New York, that chronicles 100 years of recorded jazz, and spent 15+ years performing, touring and recording as a founding member
of Bobby McFerrin’s wildly innovative a cappella ensemble, Voicestra.

For this performance Nicolas will be accompanied by the Cory Weeds Trio, showcasing music from his many projects and new music from his latest CD, “ I Remember You: The Music of Nat King Cole” celebrating Nat’s 100th Birthday. 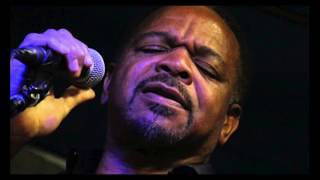