We are delighted to have the band Homespun to play for the evening. We will st...

The Highlands Music Coffee House is held on the 2nd Saturday...
Open / Operational

We are delighted to have the band Homespun to play for the evening.
We will start the evening with open mic segment.

About the band Homespun: Homespun is a grass roots project that highlights the talents of veteran performers. The members of the band are:

Victoria-based singer/songwriter/acoustic guitar player Duncan Sutherland has been performing in the Victoria area with several bands over the past 12 years. He was a founding member of the bluegrass band Shady Characters and the acoustic roots group Bowker Creek. Recently Duncan has branched out on his own with two projects featuring his own compositions: Crystal Creek and now Homespun. Duncan’s music is influenced by folk, bluegrass, blues, country and even a bit of swing!

Lead and harmony sisters Bonnie Dennis and Candy Little bring a distinctive depth and beautiful sound to the band. They spent their childhoods in a lakeside northern BC log cabin. Without TV, the family spent their evenings singing and learning harmonies. Candy and Bonnie have been honing their harmony skills ever since.

In 2000 Candy performed the part of Naomi Judd in “A Tribute to the Judds” along with her another of her sisters and won a spot on Dick Clark’s TV production, “Your Big Break”. For the better part of 18 years, the pair graced the stages of prestigious events including Merritt Mountain Music Festival, a tour of BC with Vancouver’s “Legends of Rock n’ Roll”, a stint at the Calgary Stampede, and repeat performances in Lady Lakes, Florida.

Stand up bassist and vocalist John Cornes’ musical career has taken him down many roads. More recently he has played with the Children of Celebrities, Dinette (a Gypsy jazz band) and is currently with Bowker Creek.

Brad Hawkes love of drumming began in 1964 when his dad bought him his first set of drums. His first gigs were playing along with the jukebox at sock hops. Brad started playing congas in the late 60s in coffee houses. He has recorded and performed with a variety of songwriters, choirs and bands on Vancouver Island. His music styles include folk, country, bluegrass, celtic, jazz, rock, latin, Persian, blues and choral.

Classically trained flutist Winnie Cooper brings her melodic interpretations and improvisations to the band. Winnie has been playing flute since 1969! She is currently involved in a number of projects in Victoria including Homespun. No matter what the style of music Winnie will shower it with energy and creativity. Winnie will be fondly remembered as the host of the James Bay Coffee and Book Store music nights that ran for many years. 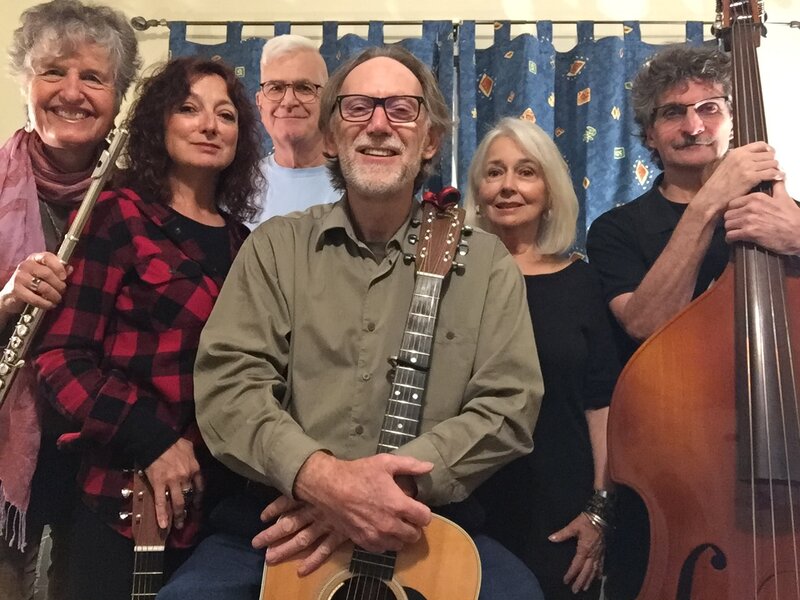