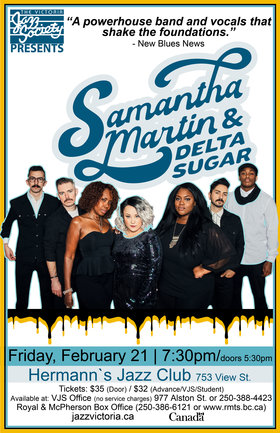 Samantha Martin & Delta Sugar have been raking in rave reviews, having performed over 500 times within the last four years. The Canadian Independent Music Association awarded Martin and Delta Sugar with the certification of “Road Gold,” having sold over 25 thousand tickets to Canadian fans over a twelve month period.
This remarkable 6-member band recalls the best of the soul and blues sounds of Stax Records and such contemporary artists as Leon Bridges, Sharon Jones, and Lee Fields. Their latest album, Run To Me, released in April 2018 and reached #2 on Earshot, #1 on Roots Music Report, and #1 on Stingray’s Blues channel radio charts. This album was nominated for “Blues Album of the Year” at the 2019 Juno Awards, and received four nominations at 2019 Maple Blues Awards. Their 2015 album, Send the Nightingale, was a stunning achievement which also garnered four Maple Blues nominations in 2016 and was regularly featured on the CBC. Subsequent to the album’s release, Martin has been nominated three years in a row as “Female Vocalist of the Year” at the Maple Blues Awards.
A dynamic front woman, Martin possesses a exquisite voice that is rich with emotion and brings out the nuances of her gut-wrenching lyrics. A torrid force of nature, she takes audiences to emotional peaks while leaving them stunned. The chemistry of Delta Sugar, however, is not the work of a single talent. In combination with what she likes to term her “co-vocalists,” Sherie Marshall and Mwansa Mwansa, and a powerhouse band, the blend Delta Sugar produces is pure, unadulterated gospel-tinged, neuron-tingling magic where the sum is even richer than the already soul-melting parts.