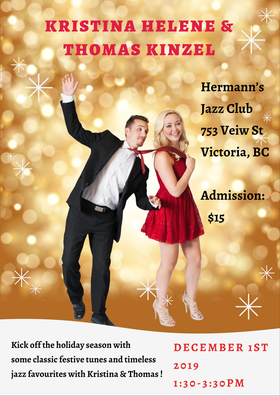 Music: Jazz / Blues
Kristina is a Calgary born singer/songwriter. She wrote her first song at the age of eight and recorded for her first time in a little garage four years later. She then went on to work with producer Greg Gunhold and was nominated semi-finalist in the ISC (International Songwriting Competition) at the age of 15 two years in a row for her song "From Here" and has also won honourable mention awards from the Billboard Music for her song "Where is this going?" and twice for "How Could You". How Could You is available on iTunes.

Kristina now resides in Victoria BC and has travelled back and forth to LA working with her producer CJ Vanston. In LA, she has had the honour of recording a couple of jazz cover songs at Capitol Records with legendary engineer and record producer Al Schmitt and Steve Genewick. She is now 27 years old and has recently shared the stage with award winning producer David Foster and one of the most influential figures in "nuevo flamenco" music, Jesse Cook. She has also opened up for Jim Cuddy from Blue Rodeo and Naturally 7 with Thomas Kinzel. Kristina's piano vocal cover album (produced, played, arranged, mixed, and mastered by the multi talented Thomas Kinzel) is entitled 'The Nearness of You'. They are working towards an original album set to release in early 2020.

"Her voice is soft and beautiful, but at the same time powerful and rich, a voice that touches the depth of the heart."
- Oops! Magazine