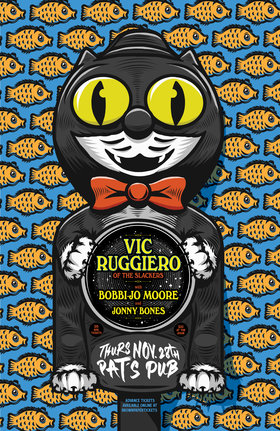 Many people know the band Vic Ruggiero is the lead vocalist of (The Slackers) but many people don't know that Ruggiero has maintained an active and healthy touring career for well over a decade. For example his brand new project Reggae Workers of The World with Jesse Wagner of The Aggrolites and Nico Leonard of the Badasonics has toured all over Europe in the short time they've been together. Vic Ruggiero finds time to be part of projects like these in addition to his solo and collaborative shows such as this one with Jory Kinjo.

Vic Ruggiero will be playing with Jory Kinjo who has been busy throughout his 20 year musical career. Starting in 1999 Kinjo began playing with a Calgary based soul band called Mocking Shadows who did 3 tours with the legendary B.B. King. His band Mocking Shadows also performed with Tragically Hip, ZZ Top and Buddy Guy.

Then fast-forward 8 years later Kinjo played bass with Canada's ska legends The Planet Smashers and then two years later created his own band which he is known most called "JK and The Relays."

Shortly after that he formed another band with his three brothers called The Kinjo Bros. They toured extensively and were invited to perform in Okinawa, Japan at the Naha Matsuri Festival which was broadcast live on TV and Radio in southern Japan.

When one takes into account the talent and experience of both of these ska/soul legends we are in for nothing less than an unforgettable concert!

Bobbi-Jo Moore - Vancouver based Singer/Songwriter. Fronted her band The Elixxxirs for over 15 years. Bobbi-Jo has been playing solo for a couple of years with a mix of pop/reggae/folk/roots/punk songs.

Coming straight out of the Bronx, musician, songwriter, and producer Vic Ruggiero is one of ska’s most recognizable voices. Perhaps most well known for his role as singer and keyboardist in the Slackers, Ruggiero has also composed, performed, and recorded with the Stubborn All-Stars, SKAndalous All-Stars, Rancid, The Transplants, Dave Hillyard & ... more info
Audio: Emelia, Neatly