Brought to you by Campfire Empire is everybody's favourite bi-monthly night of m...

Brought to you by Campfire Empire is everybody's favourite bi-monthly night of music and stand-up comedy. Back for our 15th installment, The Bad Mama Jama Show promises to get you grooving and tickle your funny bone. Tickets to this previously sold out show are still available and limited, so pre-order yours today.

Getting a early start to music it was only natural Jahimba better known as A.Y.E. followed in his fathers musical footsteps. Now on his own musical journey he's slowly gaining the attention of music lovers near and far. At 18 he released his first imprint the Goodbye EP which was met by a receptive audience, but it was his album 90 NOW (2014) and Nox (2016) that essentially put him on the map. Eventually landing him a one time record deal with Chopped Herring's sub label Fresh Herring out in France, garnering a nomination at the Calgary Music Awards, becoming a JUNO Masterclass Top 10 Finalist, and performing in Toronto for Canadian Music Week in 2019.
A diverse array of sounds from funk, rnb, blues, reggae, layered atop a raw/soulful hip-hop foundation. A.Y.E. and his band, The Extraordinary Gentlemen are proof that it's okay to stand outside the box. A.Y.E. truly possess an undeniable warm energy with his smooth delivery and captivating stage presence. They've performed at several music festivals and venues in western Canada such as Canadian Music Week, One Love Music Festival, Sled Island, The Works Music Festival, Lilac Festival, Fozzy Fest and more. Listed by CBC Music as an emerging act to watch (2017).
https://open.spotify.com/artist/61CMQn560ytCEt3dJgUe9C?si=mtERy6g9SNK83R0th3lq6g

As always, the second act of our show brings you some of the funniest stand-up comedians Victoria has to offer. This time we're featuring the talents of Shane Priestley, Henok Meresa, MJ Bourque, Quincy Thomas, with the evening hosted by Miles Meechan

A.Y.E. and the Extraordinary Gentlemen 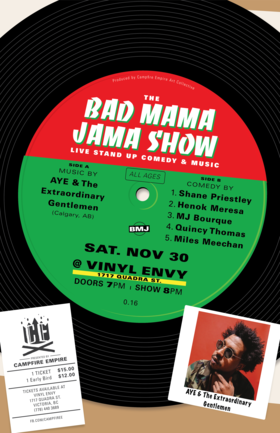