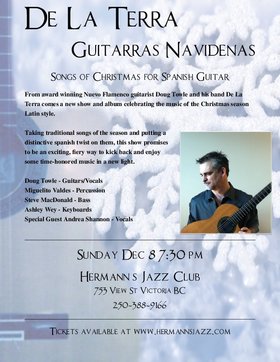 Taking traditional songs of the season and putting a distinctive Spanish twist on them, this show promises to be an exciting, fiery way to kick back and enjoy some time-honored music in a new light.

Doug Towle has traveled the world with a guitar on his back. Absorbing musical styles from the far reaches. He has released seven albums of instrumental guitar music including his newest offering “Guitarras Navideñas”. He has won praise from audiences and industry alike. He is one of the premier guitarists in Canada.