Ashley MacIsaac needs no introduction. He is one of the most celebrated Canadian...

Celtic, Gypsy Jazz, Bluegrass from Victoria BC
Available for Shows/Gigs

Ashley MacIsaac needs no introduction. He is one of the most celebrated Canadian roots musicians of all time, having sold in excess of 500,000 albums, Ashley has garnered international acclaim by playing the fiddle in that hard-nosed, traditional Cape-Breton style, while adding his own spin, mixing genres and updating Celtic music to appeal to a broader spectrum of fans. Considered something of a local legend and prodigy by the time of his impressive 1992 debut Close To The Floor, Ashley broke through to the mainstream with the double-platinum genre-bending Hi, How Are You Today? in 1995. International radio play for the single, Sleepy Maggie, and a regular slot on MuchMusic made Ashley an instant Canadian icon.

Much has been said about the antics of the enfant terrible of the Fiddle, but only because he has had international success and notoriety from an early age and grew up under the spotlight as one of the most dynamic fiddlers from Cape Breton, Nova Scotia. MacIsaac constantly pushed the traditional styles of Celtic music as he grew up and incorporated rock, pop, and everything imaginable in between.

A renowned fiddle player, piano player and step dancer, Ashley MacIsaac has performed in the opening ceremonies at the Vancouver 2010 Winter Olympics to a worldwide audience and with artists such as Phillip Glass and The Chieftains. Ashley also played with The White Stripes for their “Under Great White Northern Lights” Canadian tour which was turned in to a documentary. He has appeared on the Conan O’Brian show, the Today Show and has been a spotlight at international festivals, theatres and halls all over the world. He has also been featured on Bravo’s celebrity series “Star Portraits” and CBC’s acclaimed series “Life & Times”

With diverse musical talents and a bottomless pool of creativity, Quinn Bachand is recognized as the "Young Lion of the Celtic guitar" (Daniel Lapp) and "Canada's top Celtic guitarist" (Ashley MacIsaac). Although Quinn plays a range of styles that include jazz and bluegrass, it is his talents in the world of Celtic music that have drawn much attention. A gifted and creative guitar player, Quinn adds a contemporary edge to traditional Celtic music. His unique harmonies, hard-driving strumming, inventive chord voicing and powerful rhythmic effects make even the most well-worn tunes seem new and exciting. His work in the duo with sister Qristina, as well as his gypsy jazz project, Brishen, have earned him a mantle-packing collection of national and international nominations and awards. These include 8 nominations at the Canadian Folk Music Awards, 4 nominations at the Western Canadian Music Awards, an Emerging Artist Finalist position in RBC Canada's Walk of Fame, the Saga Djangofest Award, two consecutive wins at the Irish Music Awards, 2010 Top Duo and 2011 Top Traditional Group and a win at the Independent Music Awards for his album, "Blue Verdun". His latest release, Tunes in a Hotel, is receiving critical acclaim and steady plays on national and international radio.

An in-demand sideman, Quinn has also toured nationally and internationally with well-known musicians including Canadian fiddling icons Ashley MacIsaac and Natalie MacMaster. Quinn is also a member of the Jeremy Kittel Band and the Jeremy Kittel Trio, recording and performing with the Grammy Nominated fiddler across the US and Canada. 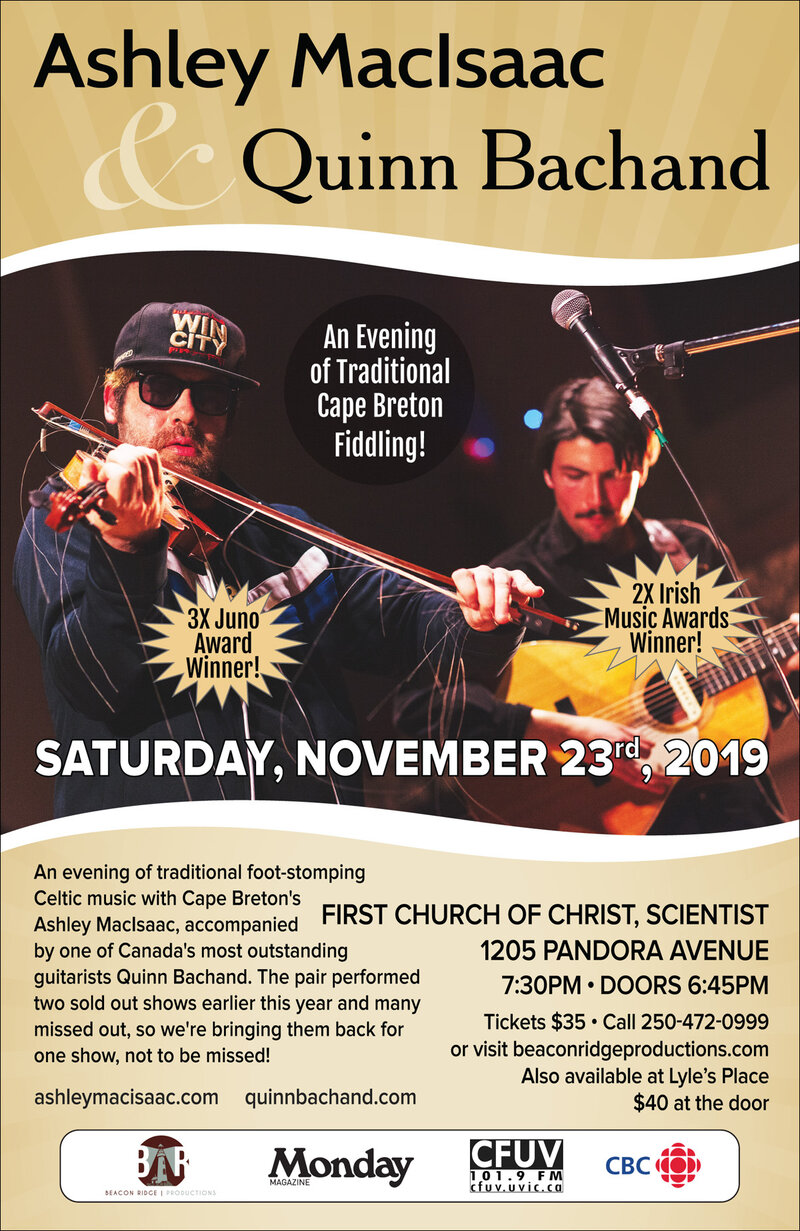