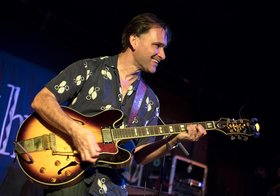 One of North America’s busiest blues guitarists is bringing his Chicago sound to Victoria and you are going to want to dance! With local guitar hero Jordie Edmonds backing him up and bassist Chris Matheos, musician Johnny Burgin launches his new CD 8 pm Friday November 22 at the Odd Fellows Hall 1315 Douglas St.

He's been praised by the Cascade Blues Association for his "stunning guitar playing-- the pure Chicago styled sound. His fans love Johnny's take on the intense, stripped-down "West Side sound" of Otis Rush, Magic Sam and Buddy Guy. Johnny is a Delmark and Vizztone recording artist with 9 CDs to his credit, most recently "Johnny Burgin Live" featuring Charlie Musselwhite.

He was nominated for a Blues Music Award for Best Traditional Blues CD of 2017 for "Howlin' at Greaseland", a Howlin' Wolf tribute.

Rather than being just one of Chicago’s great secrets, he loves to tour performing up to 250 shows a year in Europe, Japan and the US. http://www.johnnyburgin.com

He grew up in Starkville, Mississippi attending the University of Chicago at 18 intending to become a writer, but instead dove deep into the Chicago blues scene. “I ended up going to "blues university" laughs Burgin.

Johnny met a DJ on the college radio station who took him to see the Howlin' Wolf style singer James Tail Dragger Jones on the West Side of Chicago. Tail Dragger took Johnny under his wing and gave him his first professional gigs, and from there Johnny learned quickly going on to tour and record with blues legends such as Pinetop Perkins, Sam Lay and Billy Boy Arnold. And not only could he play, but he could sing and write songs. Today he is well known by all in the blues community as a modern day corner stone of the blues genre of music.

“It’s my first visit to Victoria. I’m looking forward to it. My thing has always been live music. Going to shows, booking shows, playing shows. Playing with the best musicians like Jordie that I can. More than anything, I love the feeling of getting in the van and going. Even better, once I get there, I love the feeling of knockin’ em dead.”

Get ready, Victoria, to be totally knocked out by Johnny Burgin. http://www.johnnyburgin.com