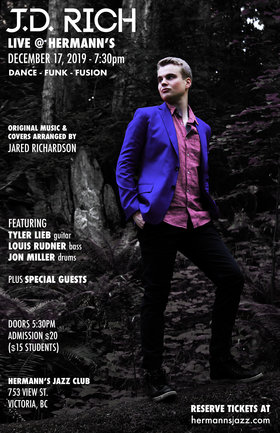 Music: Jazz / Blues
Back for a second appearance at Hermann's! With a signature sound that infuses dance-pop music with influences of funk and jazz fusion, songwriter & pianist J.D. Rich performs original music and unique arrangements of popular songs.

As a songwriter, producer, and performer, J.D. Rich strives to create music with a timeless quality, drawing on influences from modern dance music as well as classic acts of the 70s/80s. Augmenting live instrumentation with electronic sounds, his music is built to transcend genres and stand in a category entirely of its own. J.D. released the music video "Boomerang" in November 2018, followed by the self-titled EP in the summer of 2019. As a live act, J.D. performs on keyboard & vocals, backed by a full band ranging in size from a quartet to a large group featuring a horn section.

In addition to his solo work, J.D. Rich collaborates as a producer with other emerging artists from around the world. His recent credits include two debut singles released in mid-2019 – "Ozone" by Munro Thadius (Canada) and "Dil" by Geet Barua (India) featuring Jackie Foster (United States); the latter has achieved over 5 million streams and 500,000 video views to date. Also known for creating unique renditions of well-known artists' songs in his signature style, J.D. Rich won 2nd place in Owl City's official remix contest for the song "Fiji Water" in August 2018.

J.D. Rich is the alter-ego of Jared Richardson, composer & pianist from Victoria, Canada, and 2016 graduate of Berklee College of Music (Boston). Beyond his work as J.D. Rich, Jared writes and performs in other genres including jazz, orchestral music, and film scores. His instrumental music has been performed by the Victoria Symphony, Vancouver Symphony Orchestra, and the Hollywood Studio Symphony (Los Angeles); he has also been involved in the music team for Hollywood films including Get Out (Universal Pictures – 2017) and Guardians of the Galaxy Vol. 2 (Marvel Studios – 2017).J.D. Rich - piano, synth, vocals
Tyler Lieb - guitar
Louis Rudner - bass
Jon Miller - drums
plus special guests