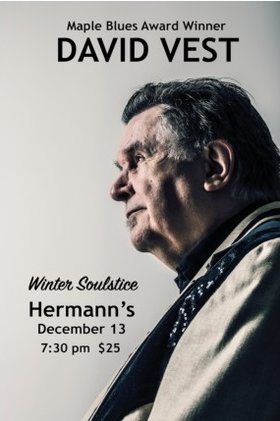 The closer we come to the longest night of the year, the more we need music that comes from the heart and reaches the soul, whether it’s a boogie-woogie number, a jump blues, a New Orleans spiritual or a holiday classic. For this show, David has chosen the songs that mean the most to him at this time of the season. As usual, he looks for the stories behind the songs, so that the people who wrote them can become more real to us, and so we can hear the old favourites in a whole new way. He has also written a few holiday songs himself, such as “Look What Santa Brought Me,” released last year on Cordova Bay Records. The band includes Damian Graham on drums, Ryan Tandy on bass, and Tom Bowler on guitar.

Maple Blues Award winner David Vest has just received his ninth consecutive nomination for piano player of the year. He has also been nominated for songwriter of the year, and three of his albums have received record of the year nominations. For the most part, his monthly shows at Hermann’s have been sold-out events since 2012, so make your reservations early.