This tour features many nights of deeply exploratory, hard-swinging modern-jazz audiences nation-wide will not want to miss.

=============
WORDS
=============
"Nick Maclean's "Rites Of Ascension" is nicely twisted and baked! A fresh look at Herbie Hancock classics and delicious new original themes all presented with taste and virtuosity. No safety net here, everyone is living on the edge. Nick's playing and writing is sublime, Brownman sounds ferocious and the rhythm section is an unstoppable force. This is truly jazz at it's adventurous best. I love the music these guys make. You will too."
- Bruce Cassidy, Blood Sweat & Tears alumni, EVI world authority

"From Canada comes this updated soul jazz in the vein of the Blue Note acid jazz compilations. Fresh and youthfully joyful reworkings of three Herbie Hancock standards lead the disc off before we settle into several of pianist Maclean's own compositions. Key to the sound is the gloriously expressive trumpeter Brownman Ali, who contributes one of his own tunes here, the funky "Madness of Nero", as well as producing."
- Hobart Taylor, KUCI 88.9 FM (California, USA)

"Rites Of Ascension is one of the best [recordings] I have heard this year (and I receive about 60 + per month). Well above average, and that Brownman Ali is just fantastic and sure rings a bell for me! Nick Maclean's compositions and renditions of Herbie's stuff is of the highest standard. Bring them to Montreal please!"
- Richard Therien, CKVL 101.1 FM (Montreal, Canada)

Repeatedly regarded as a modern take on the ferocious and hard-swinging post-bop era, the group has been busy in the Ontario jazz club circuit and featured in numerous festivals and concert series including multiple appearances at the Toronto Jazz Festival both as a featured ensemble and an often requested backing band. In addition to their original material, the ensemble has also mounted several popular tribute series to jazz masters including Herbie Hancock, Wayne Shorter, Miles Davis, Freddie Hubbard, Clark Terry & Cole Porter.

The group is frequently lauded for the strength of their collective improvisatory vision and features one of Canada's most provocative improvising trumpet-playing iconoclasts Brownman Ali, standing shoulder to shoulder with Maclean & two of Toronto's top-tier rhythm section 20-somethings: Jesse Dietschi on bass and Tyler Goertzen on drums. The synergy of the 4 is always palpable in concert.

The quartet's debut 11-track full-length album "Rites Of Ascension" features 6 Maclean-penned compositions, 1 Brownman original and 4 re-imagined Herbie Hancock classics, all recorded at the renowned Canterbury Studios in Toronto. Produced by Brownman Ali, this new disk was released on October 31st, 2017 and was nominated for CJSF's '2018 Julian Award of Excellence', it won a 'Gold' Global Music Award in the 'jazz', 'band', and 'album' categories, and was featured as one of the Global Music Awards' 'Top 5 Albums of Spring 2018'.

========================================
About BROWNMAN and BROWNTASAURAS RECORDS
www.Brownman.com | www.Browntasauras.com
========================================
Trinidadian-born, NYC-schooled & heralded as “Canada’s preeminent Jazz trumpeter” by NYC’s Village Voice, multi award-winning trumpet player Brownman Ali stands at the forefront of innovation in the Canadian jazz community. A 2x National Jazz Award winner -- with a list of awards & accolades being far too long to list here -- he is the protege to Grammy-winning trumpet legend, RANDY BRECKER, and he tirelessly leads 8 unique ensembles of his own including the internationally acclaimed, Miles Davis influenced, BROWNMAN ELECTRYC TRIO. Now splitting his time between Toronto, Canada & Brooklyn, New York, he spent 4 years as the featured trumpet player with GURU's JAZZMATAZZ, doing 4 world tours, catapulting him into the hip-hop history books. He has since worked with a wide assortment of A-list artists such as Jay-z, Missy Elliot, Mos Def, Beyonce, Paul Simon and Quincy Jones. In 2009 he launched his own record label: Browntasauras Records, which saw the Electryc Trio's two now celebrated recordings garner a substantial number of awards & press. The label is not only a home to all 8 of Brownman's own ensembles, but now looks to sign the hottest 20-somethings in jazz. The Browntasauras roster includes the NICK MACLEAN QUARTET, SNAGGLE, MODUS FACTOR, ALI BROS, JASON WILSON & DIVISION ONE and CHELSEA MCBRIDE'S SOCIALIST NIGHT SCHOOL. Now, using the label as a breeding ground for new and visionary talent in the modern jazz realm, Browntasauras and Brownman himself are widely regarded as vanguards for the evolution of Jazz in Canada and around the globe. 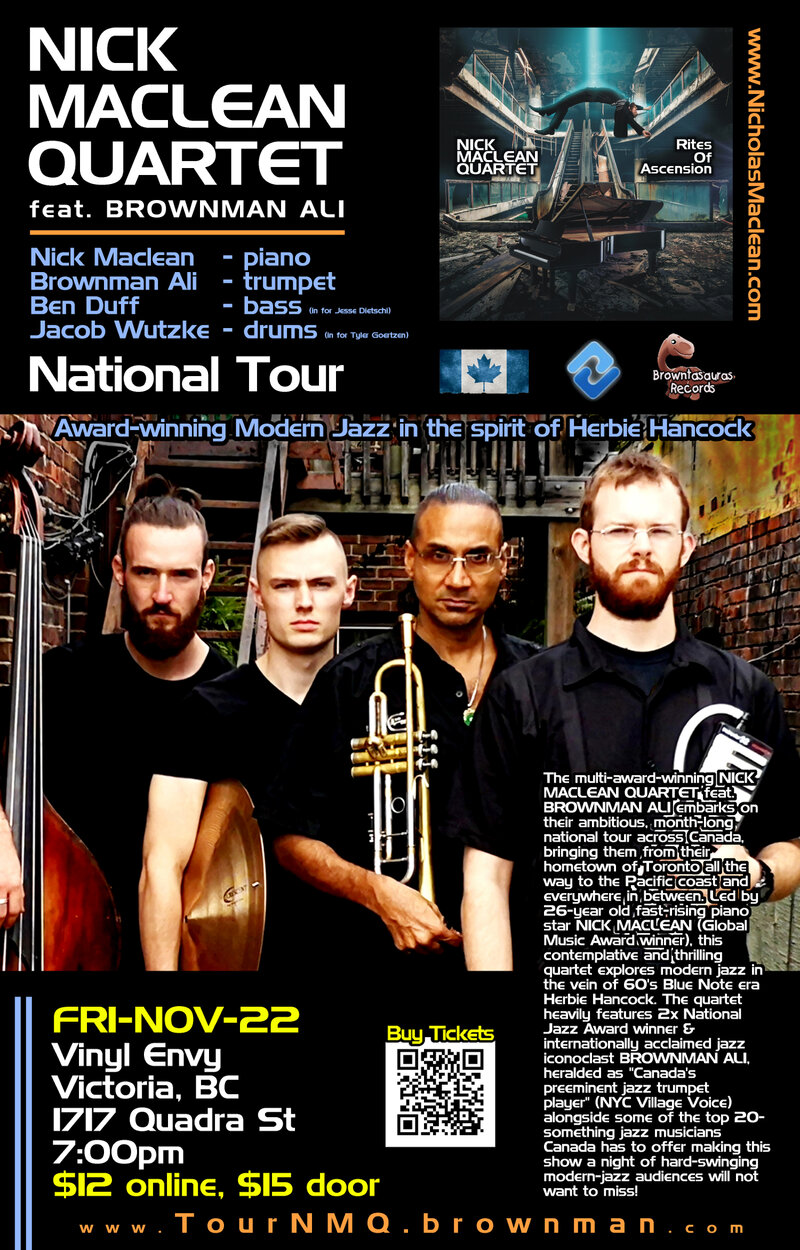