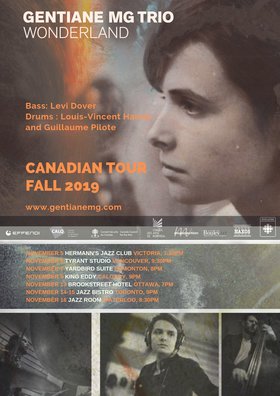 Through her compositions and with the contribution of her longtime bandmates Levi Dover and Louis-Vincent Hamel, Gentiane presents an expressive and impressionistic universe that is constantly renewed through improvisation. The unconventional forms of the pieces lay out a framework which inspires creative freedom. The depth of lyricism in the compositions is met by an equal force of unpredictability and openness, allowing the musicians to express their three personalities, at once unique and complementary.

Michaud-Gagnon has been active on the Canadian jazz scene for several years. She has performed alongside numerous renowned musicians such as Yannick Rieu, Jim Doxas, John Hollenbeck, Adrian Vedady, Frank Lozano, Andre White and Dave Laing. She has toured in Canada, China and Mexico. She studied for several years at the Quebec Music Conservatory before pursuing her studies in Jazz Performance at McGill University, where she received the prestigious Schulich Scholarship and the Graduate Award Fellowship. While there, she had the opportunity to study with Jan Jarczyk, Rémi Bolduc, Andre White and internationally renowned pianist Jean-Michel Pilc.