Tickets on sale now! “Linden is firing on all cylinders as a songwriter, gu...

“Linden is firing on all cylinders as a songwriter, guitarist, singer and producer of rare talent and integrity.”— Exclaim.ca

Colin Linden is a genuine renaissance man of music, taking influences from blues, country rock and roots. 33 years into his recording career, this multiple award-winning singer-songwriter and slide guitarist has worked with Bruce Cockburn, Lucinda Williams, Robert Plant, Leon Redbone, Diana Krall, Rita Chiarelli, The Band, and Bob Dylan. A founding member of Blackie & The Rodeo Kings, alongside Stephen Fearing and Tom Wilson, he is also a noted producer with eight Juno Awards to his credit. Linden has played on over 300 albums, 70 of which were self-produced. His originals have been covered by The Blind Boys of Alabama, Keb’ Mo’, and Colin James. As well, he has garnered multiple Maple Blues Awards, a Toronto Arts Award, and was nominated for a Grammy Award for his CD A Tribute To Howlin’ Wolf. One of his songs, Hard Time Killing Floor Blues, was featured in the hit Coen Brothers’ movie, O Brother Where Art Thou. Rich In Love, his 2015 album, was nominated for a Juno Award for “Blues Album of the Year.”

Linden has a well-deserved reputation as a slide guitar virtuoso of real originality. His riveting slide work can be heard on albums from such artists as Cassandra Wilson, The Rankin Family and Whitey Johnson, in addition to on his own sizeable catalogue. Don’t miss this prolific guitar master in a solo performance at Hermann’s Upstairs.

The Victoria Jazz Society respectfully acknowledges the Lekwungen-speaking peoples, the Songhees, Esquimalt and WSÁNEĆ peoples and their ancestors on whose traditional territory this concert will take place. 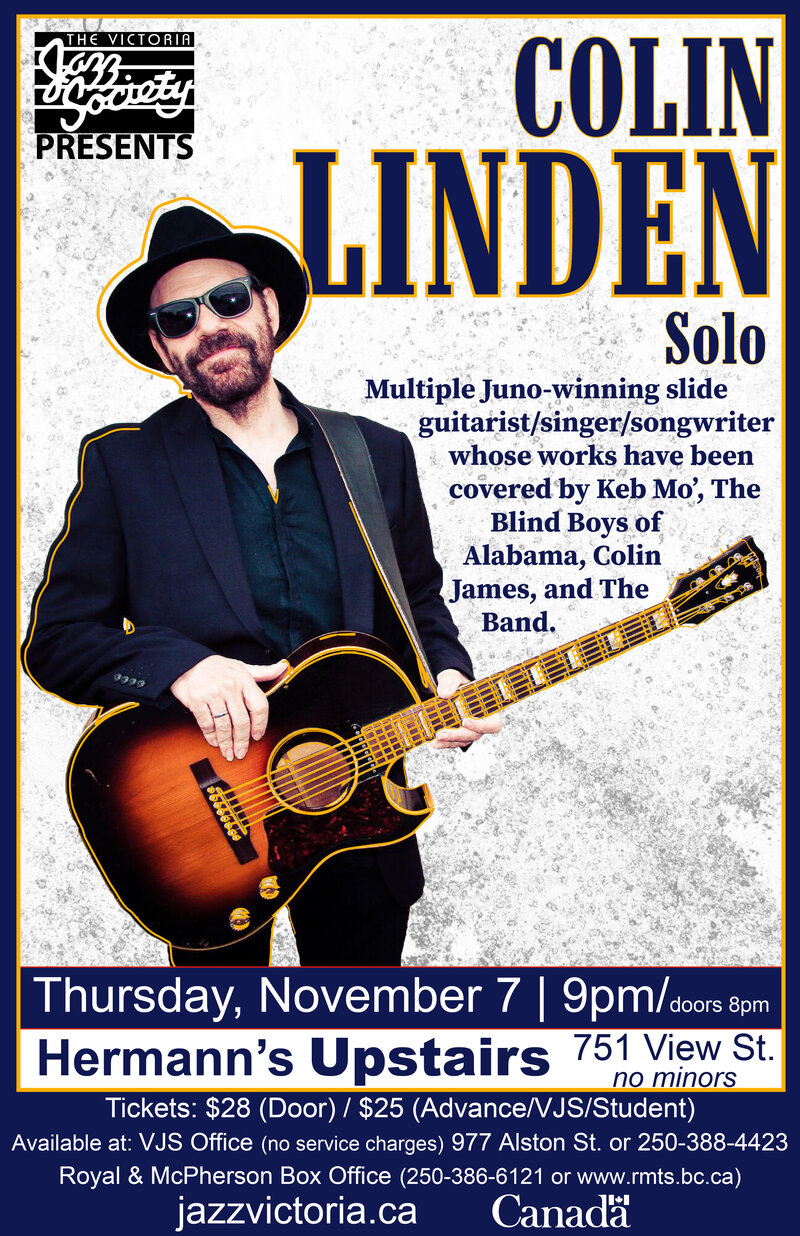