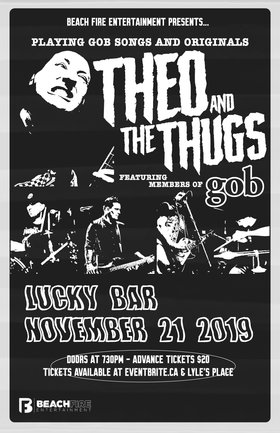 Event Archive - Theo and the Thugs

BIO
Theo and the Thugs is the brainchild of Theo Goutzinakis, co-founder of Canadian punk legends - Gob. Their debut album, due in Spring 2020, features 12 songs of rock-fuelled energy, drawing from a range of influences including punk, metal, and indie/alt rock.Now, Theo and the Thugs is hitting the road delivering a blend new songs and Gob classics to audiences across the continent. The line up includes Gabriel Mantle and Steven Fairweather of Gob, Dan Garrison of Vancouver pop-punkers The Corps and Laurence Butler,
who played drums in numerous metal bands in Vancouver, was the
first to join Theo when the project began. Fun fact: the band name goes back to Theo’s childhood. When Theo was still just learning to play guitar, his older cousin heard Theo’s style and teased him that his band would be called Theo and the Thugs. Decades later, Theo and the Thugs are lighting up stages and pummelling eardrums far and wide.