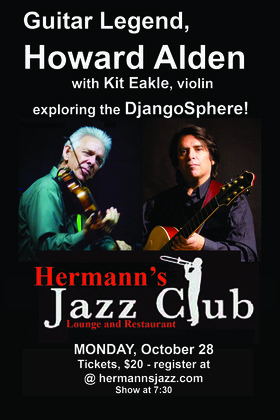 Guitarist Howard Alden " may be the best of his generation," writes Owen Cordle in JazzTimes. George Kanzler of the Newark Star Ledger proclaims that he is "the most impressive and creative member of a new generation of jazz guitarists." And Chip Deffaa of the New York Post observes that he is "...one of the very finest young guitarists working today." Wayne Thompson writes simply, in Jazzscene, "If there are better young jazz guitar players in America than Howard Alden, I have yet to hear them." Howard's growing base of loyal fans couldn't agree more. It seems that the only thing regarding Howard Alden on which the critics have debate is whether the remarkable jazz guitarist is one of the best or simply THE best.

Howard will be joined at StudioLive in Cumberland by Kit Eakle, a jazz violinist well-known to COMOX Valley folks as a former Parksville and Victoria jazz violinist and music teacher. Eakle currently splits his time between Vancouver and the San Francisco Bay Area, where he teaches History of Jazz and Jazz Violin courses at both Simon Fraser University and University of California at Berkeley. Eakle has played with groups and musicians up and down the West Coast, including with Roadside Attraction, Blackfish Sound, The Hot Club of Marin, Blaine Dunaway, Rick Kilburn, Lee Ellefson, Michael Dunn, Dan Hicks, Miles Black, Pat Collins, Dan Lapp and MANY more.

The duo will play music from Eakle’s DjangoSphere project including the compositions of Thelonious Monk and Gypsy Jazz guitarist Django Reinhardt, along with a few originals and familiar jazz standards by Duke Ellington and others.