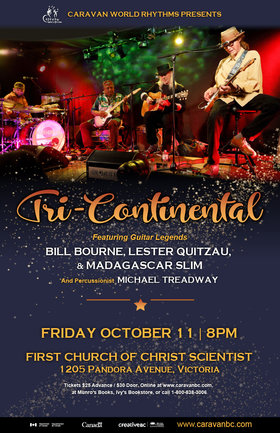 Music: Folk / Celtic / Latin / World, Jazz / Blues
There are no musical boundaries present in this one-of-a-kind blues / folk / world music mélange. Formed in 1999, Tri-Continental builds on artistic respect and a deep passion for and knowledge of the blues.

Bill Bourne, Lester Quitzau and Madagascar Slim present a truly unique and critically acclaimed sound that is soulful and present, intense and atmospheric. Well-recognized and respected artists with successful solo careers, they are indeed major players in the Canadian roots, folk and blues music scene.

Together as Tri-Continental, something very special and magical happens with Bourne – the grand improvisor, Quitzau – kidnapper of the blues taking it to new dimensions, and Madagascar Slim – a fascination with tradition and evolution found him on the leading edge as promoter of a new sound – the Malagasy blues.

This is clearly evident in the music they create, where sharing and curiosity leads them on fascinating musical explorations resulting in their infectious sound where world, Celtic, Latin, folk, flamenco, blues and African rhythms fuse into one.

Bourne, an activist for social justice, Juno Award Winner and 8 time Juno Award nominee, has been critically acclaimed across the western hemisphere for his recordings and live performances. Bourne has a style so uniquely eclectic that his powerful rhythms and soulful songs arrive steeped in world beat, blues, cajun, celtic, folk, flamenco, funk, a... more info

M eet Canadian roots music artist Lester Quitzau, a mellow guy who throws down a heavy groove. In a field where intangibles like feel and integrity count for so much, Quitzau has forged an exemplary career. What began with a solid blues apprenticeship in the funky working-class bars of Edmonton has grown into an eclectic and constantly evolving ... more info
Submit info on this show to our admins