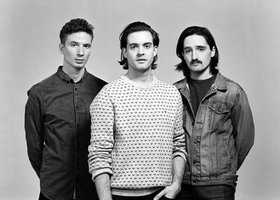 Music: Pop / Rock / Indie
Scenic Route to Alaska are once again hitting Canadian highways for a string of intimate and high-impact live dates this fall all in anticipation of a jam-packed 2020.

For two straight years between 2016 and 2018, the heralded Edmonton-based indie pop trio worked tirelessly scaling the summit of the music scene. They dropped two acclaimed LPs Tough Luck and Long Walk Home that weaved memorable melodies and catchy vocals through compelling, musically-rich arrangements and earned a slew of awards and accolades on their backs. Theyve toured relentlessly across North America, Europe, and Australia and subsequently watched their fanbase grow exponentially the world over.

Following some overdue and well-deserved downtime earlier in 2019, the band is now preparing to share their first taste of new music in over 18 months ahead of a handful of highly-anticipated shows between B.C. and Ontario that are sure to satisfy loyal fans and new followers alike.