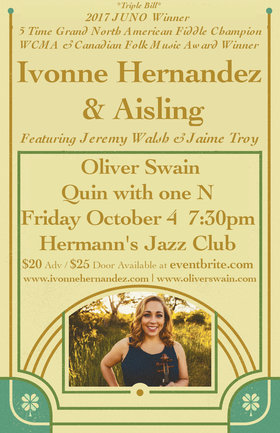 Oliver Swain has been a celebrated musician for years, held in high regard in acoustic and folk music styles for both his astonishing instrumental and vocal abilities, though he seldom gives the genre a fully traditional treatment. Oliver Swain strays towards the whimsical, the spiritual, and the socially conscious side of what he likes to refer to as “chamber folk odyssey”, and it’s these beguiling and provocative elements that make him unique as an artist and songwriter. Devon Leger even called him “The Zen Rock Garden of old time music” No Depression
“This is genre defying at it’s best… beautifully played and performed, each song a mini masterpiece.” — Paul Jackson, Fatea magazine UK

Quin Etheridge-Pedden is a 17 year old musician in British Columbia. Already making waves and winning awards for his creativity and virtuosity. He started taking fiddle lessons at a young age and is now performing all around the province. He also plays guitar and sings, performing a lot of his originals as well as covers. As well as performing as a solo act, Quin is in several groups (Fiddelium, Queue The Music, Kadence and The Neighbours). In each band he plays different styles of music including Irish, Celtic, folk, rock, bluegrass, and pop. Quin’s knowledge of music of different genres and experience playing in different groups has allowed him to create a solo ‘one-man band’ using a loop pedal, multiple effects, les pieds, his guitar and voice.