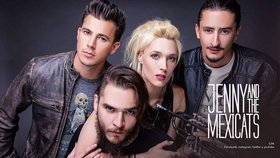 Event Archive - The 20th Anniversary of The Morning After Show Radio at CiTR: Jenny and the Mexicats, Maria Blues, Cawama

Jenny and the Mexicats is originally a 4-piece band with members from UK, Spain and Mexico (they are touring with 7 musicians). Their style is a blend of dancing rhythms like cumbia, jazz, rockabilly, folk, flamenco, reggae, son veracruzano, creating a world sound that captivates audiences. Their three albums are a mix of half Spanish and half English and they have worked independently releasing their material on Mexicat records and touring constantly in USA, Mexico and Europe. Now they are beginning to tour more in Latin America and for the first time they will be playing in Vancouver in their Canadian premiere on November 22nd.
Most singles you will find on line are in Spanish like Verde Mas Alla with over 23 million views. This is due to the fact that Jenny and the Mexicats are based in México but are now enjoying concentrating their effort in English speaking countries. Their debut album obtained gold status with over 30,000 sales.
This year Jenny and the Mexicats are celebrating their 10 anniversary with a celebratory album which is a collection of tracks from their 3 albums. They are currently writing and recording their 4th album.

Cawama is a Surf/Punk Garage Rock revivalist band formed in Vancouver BC in early 2012 combining influences of 80's and 90's garage rock with a 70's and 80's old school punk and surf to create a fresh new groove. more info
Audio: Feedback, Lie Awake, Graveyard Boogie
Submit info on this show to our admins