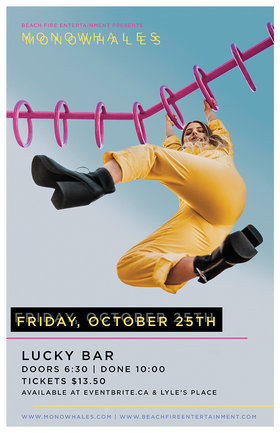 Fueled by a passionate desire to create a sound as unapologetic and powerful as the personalities within the band, MONOWHALES have taken the experiences gained fighting their way up the ranks of Toronto’s music scene and barrelled headlong into the creation of their new EP Control Freak. � Exploding onto the scene with a DIY ethos and an unforgettable live show, MONOWHALES first made waves with their breakout single Home in August 2016. The band would go on to share stages with Dear Rouge, K.Flay, Matt and Kim, Coleman Hell, and many more. � The band's new EP Control Freak, released in June 2018, was produced by AL-P (MSTRKRFT, Death From Above 1979) and spawned multiple singles that received radio play across Canada. First single "Take It Back" was described by 102.1 The Edge as "the track that put [MONOWHALES] on the indie rock-map in Canada" after it peaked at #25, while second single "Real Love" climbed to #31. � MONOWHALES were recently awarded the Jim Beam INDIE Award for Best Alternative Artist/Group of the Year and the Forest City London Music Award for Ontario Independent Recording Artist. The band is currently working with producer Ryan Worsley (Dear Rouge, Brave Shores) on their upcoming release.