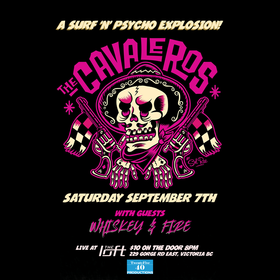 The Cavaleros continue to spread their special brand of instrumental Rock n' Roll winning over new fans both regionally and internationally. They also play at some of the biggest Rockabilly Vintage festivals in the world, Viva Las Vegas, Nashville Boogie to name a few and just released their first album Atomic! on Atomic Recordings... which is gaining rave reviews, regularly making the top album lists on radio stations world wide!

The Cavaleros - Instrumental Surf Rockabilly trio based in Victoria B.C. All 3 members come from different parts of the globe: Graham Fraser (Guitar) has been playing and living in Europe for the last 12 years. German Ebert (Drums), is from Buenos Aires, Argentina and has also lived and played in Los Angeles and Ottawa.Johnny C (Bass) was also liv... more info
Submit info on this show to our admins