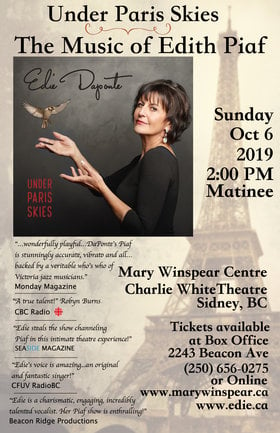 Music: Classical, Jazz / Blues, Tribute / Cover Theatre: Musical
Edie Daponte returns to the Charlie White Theatre for one more encore! Her Under Paris Skies show has proved to be a fan favourite with two previous sell out Sidney shows in 2017 and 2018. Now Edie returns with full live band, invigorated by recent album releases and a tour of mainland BC! It’s the same legendary music of Edith Piaf performed in Edie’s captivating style, but this show will have a few new songs, costumes and surprises!

Celebrating the release of the Under Paris Skies album, supported by the Creative BC Amplify grant, the return to the Charlie White Theatre in Edie’s home town is sure to be a magical afternoon. Joining Edie are long-time collaborator Joey Smith on bass, and Vancouver Island favourites, Karel Roessingh on piano, Aaron Watson on accordion and guitar and Jonathan Eng on percussion. Share the atmosphere of an intimate Parisian theatre and enjoy the soulful, emotional and captivating music inspired by the city. Channelling Piaf, with her rich timbre and captivating stage presence, Edie aims for a completely authentic experience
http://www.edie.ca/