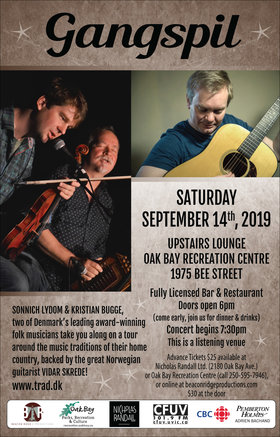 Music: Folk / Celtic / Latin / World
Sonnich Lydom & Kristian Bugge, two of Denmark's leading folk musicians take you along on a tour around the music traditions of their home country, backed up by the great Norwegian guitarist Vidar Skrede!

Sonnich Lydom (accordion, harmonica), Kristian Bugge (fiddle) and Vidar Skrede (guitar) will guarantee you an entertaining and varied journey through the rich traditions of Danish folk music. This lively trio perform old dance tunes and songs from every corner of their Scandinavian home country. From rural islands like Laeso, to Copenhagen, including a few of their own compositions. Expect everything from polkas and jigs to lyrical waltzes, fiery reels and happy hopsas, plus the exotic "Sonderhoning" dance tunes from the famous Island of Fano, and long forgotten songs from all over the country. An unforgettable live experience spiced up with humour and stories from their many years on the road.

Gangspil have toured intensively and played hundreds of shows in North America since 2015, and all over the world. The group has become a well-known name in trad and folk circles both in Scandinavia and abroad. In 2016 Gangspil received the "Tradition Award" at the Danish Music Awards (Danish Grammy).

Sonnich (accordion, harmonica, vocals) is a master of Irish, French-Canadian and especially Danish traditional tunes. For the past 25 years he's been leading the revival for diatonic accordion and harmonica in the Danish folk music scene. He is best known from his work with the ULC Trio, who received the Danish Music Award in the "Folk Album of the Year" category both in 2001 and 2004.

Kristian (fiddle, vocals) has specialized in the strong Danish folk music traditions, He is very active on the Danish and Scandinavian folk music scene as well as throughout Europe and North America, both as a musician ans as a teacher. His debut solo CD was awarded "Danish Debut of the Year" and "Danish Folk Instrumentalist of the Year" Awards at the Danish Music Awards in 2006. In 2012 and 2016 Kristian received the "Danish Folk Artist of the Year" Award. More info: http://www.kristianbugge.com

Victor (guitar) is from Haugesund, Norway, and is a leading musician on the Nordic folk music scene and a popular tune writer. His compositions ar eplayed and recorded by bands like Fiddlers' Bid and Blazing Fiddles. He works and performs as a freelance Nordic folk musician on guitar, hardanger fiddle, fiddle and Greek bouzouki. He has a background in the traditional music from Rogaland (South West Norway), and has a Master’s Degree in Nordic Folk Music from the Royal Academy of Music in Stockholm. He has performed with many of today's leading traditional players including Liz Carrol and Bruce Molsky. More info: http://www.vidarskrede.com

The Upstairs Lounge is a licensed restaurant and bar, doors open at 6 pm for dinner service, the concert starts at 7:30 pm. THIS IS A LISTENING VENUE.