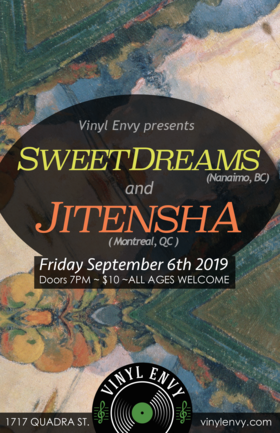 Jitensha is an indie music duo based in Montréal. The project consists of Canadian musician David Martinez and US-born performer Erin Rose Hubbard. These two charismatic musicians create upbeat, insightful songs with a highly emotional concept, combing catchy melodies and indie aesthetics with understated song writing skills. The pair focuses on personal themes such as self-discovery, determination and empathy. Jitensha is the Japanese word for bicycle, which serves as a metaphor for the power of human energy. The direction you choose, and the energy you put in, determines where you end up!

Local sweet hearts!!!
From Nanaimo, BC, Canada, Sweetdreams brings together broad influences and tight musicianship to create a rock band infused with the swagger of its own uniquity. Guitarist/vocalist Matt Chesterfield hauls in years of rock nostalgia, channeled through his airy yet percussive vocals. Keyboardist/vocalist Kendall Patrick’s pop and folk roots shine in her playing and vocal harmonies. Guitarist/vocalist Nick Begg is expressive in every sense of the word, pulling his new wave and alternative influences together into consistently innovative performances. Vintage krautrock influences drive drummer Raven Woods ornamental style as he plays off of bassist Jason Felker’s cool, collected approach. This and more is captured on Sweetdreams’ independently released debut album Sliver Lies. With plans for a sophomore release within the next year, Sweetdreams seems to be more than ready to keep showing what they’re made of. - Maguire Stevens