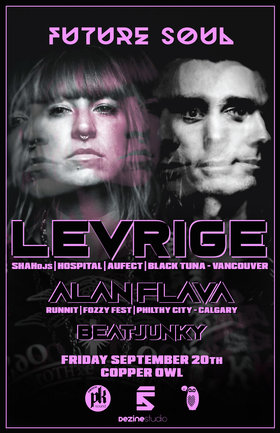 Music: Electronic / DJ
Excited to finally have J.F.Killah & Erski aka LEVRIGE come over from Vancouver and headline Future Soul. We also have ALAN FLAVA from Calgary in the middle slot and BEATJUNKY to open the night - should be a good one!

Hailing from Vancouver, BC comes the duo Levrige, aka Erski & J.F.Killah. Representing Vancouver's famed SHAHdjs crew, they have been honing their skills for years. Producing their own unique brand of infectious bass music, they represent an exciting wave of talent from Canada's West Coast. Effortlessly combining elements of Drum & Bass, Hip Hop, Jungle and Footwork, their music is a perfect representation of all that is right with underground dance music.The iconic melodies and depth in their work is evident in their sound, which ranges from tough badboy swagger to smooth dubby grooves. With releases on Hospital, Aufect, Black Tuna, East Van Digital and Shadow Trix, there is plenty more in the works. Be sure to keep it locked on Levrige for big releases and collaborations on the horizon.

Starting his career in 2000, Alan Flava has been no stranger to the electronic music scene. He has played many club nights, raves, and festivals across western Canada, aswell as being The stage coordinator of the Fozzy Fest beach stage. He is a DJ/Producer for Truespin Records and also holds the title of Head of Promotion for the label. 2012 saw the release of his first remix for digaBoo’s track “Bend Over”, followed by his first signed original tune “The Power”. In early 2014 Alan Flava joined with Philthy City Productions, one of the largest DnB crews based out of Calgary, AB. Anyone that has heard him rock the decks before can tell you he plays a very eclectic sound, ranging from Glitch Hop, Ghetto Funk, Jungle and DnB. Expect nothing but high energy and a rowdy good time with every set he plays.