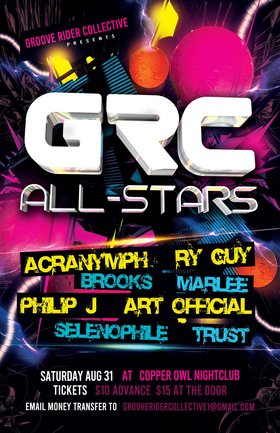 That is exactly what we've done! We've brought some of the very best in local house music artists along with some East Coast flair, ranging from genres like Bassline, to Electro, to Bass house and everywhere in between!

As always, Groove Rider Collective aims to create a night of heat filled dance action to be remembered!

As always, we will have PHOTON out to do those wicked visuals, and the shot caller ZENON KAI immortalizing those in love with the beat.

PLUR is the mantra of all GRC events🌈🌈✌️🙏

Brought together by their mutual love and appreciation for authentic Funk & Soul music. The Brooks never ceased to amaze since the release of their first album in 2014. Aside from being part of the most recent Montreal Jazz Festival as the opening act for Charles Bradley and setting the main stage on fire twice with their funky rhythms. The Brooks ... more info

Trust is Robert Alfons and Maya Postepski (of AUSTRA). Formed in 2009, the Toronto-based duo released its first singles, "Candy Walls" and "Bulbform," on Brooklyn-based Sacred Bones Records in 2011 before signing with Arts & Crafts for the 2012 release of TRST. Tales of lust, wax, and erotomania carry along on a dense black vapor of speed, space ... more info
Submit info on this show to our admins