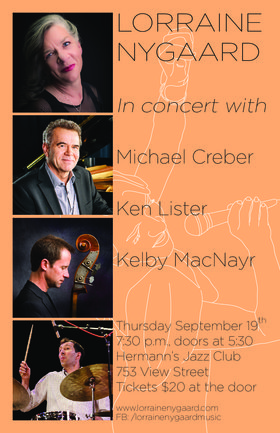 Music: Jazz / Blues, Pop / Rock / Indie
Local songstress Lorraine Nygaard is thrilled to bring together for the first time at Hermann’s: Mr. Michael Creber on piano, Ken Lister on bass, and Kelby MacNayr on drums.
- West Vancouver-based Mr. Creber is renowned for his work as pianist, conductor, producer, writer and more, is a Grammy nominee, and has worked with the likes of Joan Rivers, K.D. Lang, and Andre Bocelli. His list of credentials is so extensive, it’s best to check out his website: https://www.michaelcreber.com
- Ken Lister, bassist, from Qualicum Beach has collaborated with Lorraine on her debut album, First Off the Floor, and in separate performances at Hermann’s. He is a Juno award winning musician for many reasons, and a cherished performer wherever he appears, as well as an instructor at Vancouver Island University. http://www.kenlister.me
- Kelby MacNayr is well known at Hermann’s and so many other venues in the Pacific Northwest and beyond. As a stunning drummer, a polished host and showman of the various events he creates, Kelby and Lorraine have worked together often. http://www.kelbymacnayr.com
- Lorraine’s slow and steady rise as a performer sees her shows at Hermann’s regularly selling out. From a powerful voice that runs a full range of octaves and moods, she delivers emotion, drama, and the life wisdom that comes from having done the work. http:// http://www.lorrainenygaard.com

Reserve early, or tickets at the door. $20