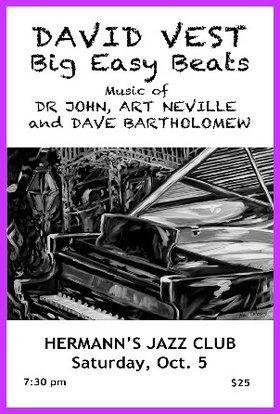 Music: Jazz / Blues
David Vest and his band play the music of New Orleans legends Dr. John, Art Neville and Dave Bartholomew. Dr. John of course was Mac Rebennack in real life and the Nite Tripper on stage and recordings. A beloved master of New Orleans piano styles, he was a performer dedicated to keeping gris-gris alive and an activist for saving the Louisiana wetlands and his beloved Crescent City. Art Neville, besides being a key member of the Neville Brothers, and an important solo artist, was co-founder and leader of The Meters, the band that backed Dr. John on his biggest hits in addition to having their own hit singles. Trumpet man Dave Bartholomew was Fats Domino’s bandleader and co-writer for decades. The records he played on sold more copies than anyone except Elvis during the 1950s, and he was active right up until he passed away last June.


In addition to performing at the New Orleans Jazz Fest in 1995, David Vest has played New Orleans music all his life. He recorded in Baton Rouge when he was barely out of his teens. He considers the recent loss of Dr. John, Art Neville and Dave Bartholomew to be a tremendous blow to the world of music, and he Is determined to recapture just a bit of the joy they brought to audiences around the world.

They don’t make them as real as David Vest anymore. Long revered as one of the great boogie-woogie piano players, he’s the son of an Alabama sharecropper. He grew up in genuine juke joints and has amazing stories to tell. Along the way, he played with many blues greats, from Big Joe Turner to Jimmy T99 Nelson. A five-time winner of the Maple Blues Award for piano player of the year, he’s the living embodiment of that classic Fats Domino line: “Clap your hands and stomp your feet, you got to move when you hear that beat.”

David’s band for this show includes Tom Bowler on guitar, Morgan Onda on sax, Joey Smith on bass and Damian Graham on drums.