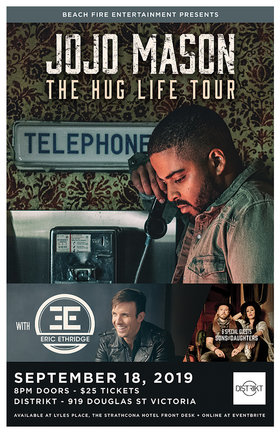 For 604 Record's JoJo Mason, the past three years have been an incredible journey.

Now, with four Top 10 tracks under his belt, the west coast artist is ready to hit the ground running once again, and he's more than excited to see what's on the horizon.

It's a song that peaked Mason's interest immediately, and one that blended his two favourite musical styles country, and a little bit of soul.

Written by Nashville singer/songwriter Mitchell Tenpenny, "Future" paints a vivid picture of what can happen when one certain moment changes your life in ways no one could ever imagine. For JoJo, the track is nothing short of a game changer.

Eric Ethridge's brand started to gain serious momentum in 2015 after the release of a series of orchestra country-pop covers, one of which garnered him a mention in Rolling Stone Magazine. Subsequently his social media presence enjoyed a drastic increase with over 275,000 YouTube hits and an increase to over 1500 YouTube subscribers. In August of 2015 Eric was the runner-up in the Boots and Hearts emerging artist showcase, and has since had continued interest from both American and Canadian record labels. In early 2016 Eric was selected by a panel of industry professionals from across Canada to be one of the top 6 finalist for the CCMA Discovery Program. After a final showcase of the top 6 emerging artists, Eric then went on to win the 2016 CCMA Discovery Award. He has shared the stage with major acts such as Jess Moskaluke, Brett Kissel, Emerson Drive, Chad Brownlee, The Bros. Osborne, Chase Bryant, Randy Houser, Chris Young, Billy Currington, Thomas Rhett, Kip Moore, Eric Church and Florida Georgia Line. As the newest addition to The Feldman Agency and Watchdog Management, Eric has teamed up with Juno award-winning producer/songwriter Brian Howes (Nickelback, Keith Urban, Chris Daughtry, and Hinder) to develop his sound for his debut single, "Liquor's Callin' the Shots". It was released toCanadian Country Radio in March of 2017 and peaked at #30 on the Canadian Country Charts, a rare achievement for an independent artist's debut single.

"Your voices sound like you came from the same womb," said Brian Johnson (ACDC) after hearing Sons of Daughters for the first time at a private dinner party.

Sons of Daughters are a modern, gritty, country duo comprised of Chrystal Leigh and Jimmy Thow, hailing from Vancouver, BC, now based in Nashville, Tennessee. The duo can be seen performing on CTV's The Launch, a fresh new spin on the music show format, with celebrity mentors such as Shania Twain, Nikki Sixx, Scott Borchetta, and more.

The move to the home of country music proved to be game-changing for the duo as the exposure landed a management deal with RGK Entertainment Group (which oversees Dean Brody, Tim Hicks and more). Since their move to Nashville, they have collaborated with numerous Grammy nominated, #1 song writers while continuing to expand their catalogue, and have showcased at the iconic "Bluebird Cafe", "The Listening Room" and Nashville's favorite Monday night party, "Whiskey Jam".

The duo is committed to carving their own unique sound in the modern country scene through captivating vocal harmonies, swampy guitar riffs and catchy lyrics, and the industry is already rooting for their continued success.