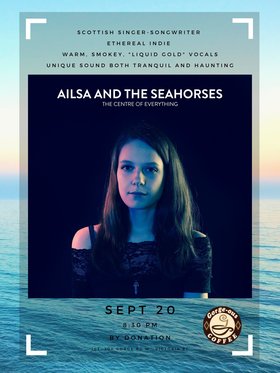 Event Archive - Ailsa and the Seahorses:

Music: Pop / Rock / Indie
Scottish singer-songwriter Ailsa McEwan is known for her distinct brand of ethereal indie, delivered by a warm smoky vocal described by one fan as "liquid gold". Performing under the name Ailsa and the Seahorses, her unique sound, both tranquil and haunting, is somewhere between the atmospherics of Mazzy Star and singer-songwriter tradition of Rickie Lee Jones.

Following the release of her debut EP, she is touring Canada and Europe, spreading her songs of hope and melancholia across the globe.