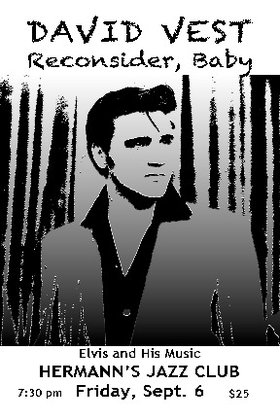 Music: Jazz / Blues
This is a show about Elvis the music lover. Before he made his first recordings (as a teenager), he already possessed an encyclopedic knowledge of the blues. He also knew a lot about gospel and other genres, and his best recordings show these influences clearly. John Lennon famously said that “before Elvis, there was nothing,” an opinion that surely would have had the boy from Tupelo shaking his head in disbelief. Expect to hear some old favourites and perhaps some unfamiliar selections. Sometimes a trip down memory lane can lead to an undiscovered country.

They don’t make them as real as David Vest anymore. Long revered as one of the great boogie-woogie piano players, he’s the son of an Alabama sharecropper. He grew up in genuine juke joints and has amazing stories to tell. Along the way, he played with many blues greats, from Big Joe Turner to Jimmy T99 Nelson. A five-time winner of the Maple Blues Award for piano player of the year, he’s the living embodiment of that classic Fats Domino line: “Clap your hands and stomp your feet, you got to move when you hear that beat.”