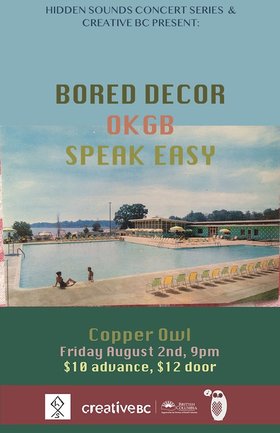 Music: Pop / Rock / Indie
Bored Décor {Vancouver}
https://boreddecor.bandcamp.com
"Bored Décor make the kind of sneering, unpredictable post-punk that created its early fascinations in the U.K. and New York City. Not that they’re a throwback act, quite the opposite - they’re a primal bunch of weirdos laying out punk-adjacent sounds derived directly from the unconscious. If you tried to describe Talking Heads to an alien from planet jazz, the sounds Bored Décor make would be what they’d imagine." - Sled Island

OKGB {Victoria}
https://okgb.bandcamp.com
"OKGB play wonderfully lo-fi post-punk that comes across as a punkier version of Devo." - Ride the Tempo

We acknowledge that this event is taking place on the unceded and stolen Coast Salish Territories of the Lekwungen and WSÁNEĆ peoples.