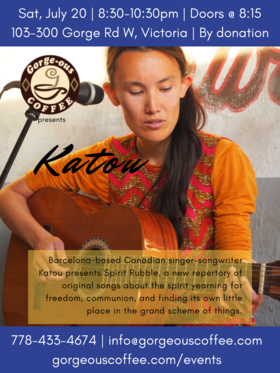 For the last 15 years, songwriting has accompanied her as a kind of diary. Inspired by wandering balladeers, she began living her dream of singing on the street 10 years ago, first playing her own music, then collaborating in different projects. From 2012-2017, she sang in the group Radio Fanjul, performing old, popular songs from around the world and recording 3 albums. After a few years' break from songwriting, Katou returns to give voice to Spirit Rubble.