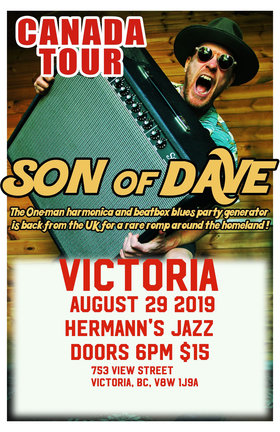 Music: Jazz / Blues
Son of Dave is a Bluesman. Not traditional, but has begun a new tradition perhaps. Playing harmonica, layering up beatbox grooves, stomping and playing percussion, then writing passionate growling infectious songs overtop, he defies category. A truly maverick Bluesman.
He comes originally from Winnipeg Canada (born Benjamin Darvill). He's been based out of London U.K. for twenty three years. He's toured all over Europe and North America as well as more off centre countries such as Uganda, South Africa, Lebanon, Russia and more. His one-man show is fun and unforgettable.
Many have come to find Son of Dave tunes through programs like Breaking Bad, Preacher, Bloodline and others where his unique songs have featured. Son of Dave has performed onstage, in studio or television with Cindi Lauper, Supergrass, Spinal Tap, Moriarty, Rizzlekicks, Neil Young, Grace Jones, Howard Levy, Patti Smith…a little harmonica and beatbox goes a long way.
As a young harmonica player he worked in the Blues and biker bars of Manitoba. Being nurtured in the tradition of Midwest Blues and Canadian folk music, he joined Crash Test Dummies at it's beginnings and rode that wave for four albums and ten years until returning to his more humble, rhythmic desires and the tunes he'd been working on through those dizzying years. The music business almost crumbled with the switch to digital, but Son found a path through the old fashioned way, playing clubs and building an audience from scratch. He's recordings found their way to millions of fans without the backing of a big label or hit machine.
After his eighth album "Music For Cop shows" Son of Dave is releasing singles through 2019 which have already playlisted on RadoX (London) and are getting support and love in various countries. There is always new great music and news coming.