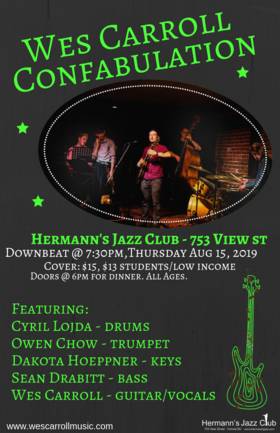 Music: Jazz / Blues
Come out to hear the Confabulation before Wes moves out to Toronto! They will be playing a mix of originals and jazz arrangements. The Confab has been working on their second studio album and is excited to take a break from the studio and hit the stage. This is not an album release.

The Wes Carroll Confabulation walks the tight-rope, balancing detailed arrangements with the power of spontaneity. Since early 2015, they have honed their unique blend: stretching out into a world of hip-hop grooves, soul and electricity while not losing their footing in jazz. Wes is a graduate of Vancouver Island University’s jazz studies program where he delved into jazz’s rich tradition and honed his skills as a songwriter. Since graduating (2014) he has made it his goal to create original music that intrigues and excites. The Confabulation released their debut album ‘Off Empire’ in 2018 and will be releasing their next all originals album in the fall of 2019.