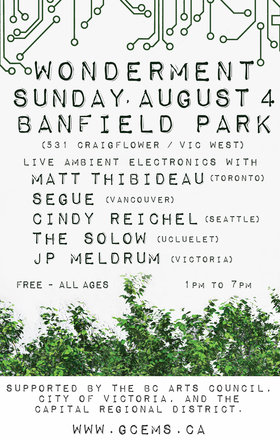 MATT THIBIDEAU (Toronto)
Matt Thibideau and his twin brother Mark have been making music and collecting vintage synthesizers since the early 1990s, and are very much the Toronto equivalent to Victoria's Jonson brothers (Mathew and Nathan). Matt is best known as one of Canada's early beacons of Dub Techno, releasing as "Altitude" on Adam Marshall's Blue imprint and under various names on labels such as Cynosure, Sub-Static, Klangscheiben, City Noises, Sushitech, Assemble and his own label, Obsolete Components, which releases hardware-based electronic music composed on analogue instruments (no computers or digital gear involved). Matt will be performing dub techno at Studio Robazzo late night on August 3rd, and will perform a special ambient set at Banfield Park on August 4th.
https://www.youtube.com/watch?v=56ZFhKDOHp0

SEGUE (Vancouver)
Wonderment hosted Segue opening for Deadbeat in 2017, and we look forward to his return to the island - fresh off of a Basscoast performance and the release of a new album on Silent Season. Segue brings a deep, lush surrealism to ambient and dub.
https://shop.silentseason.com/album/over-the-mountains

THE SOLOW (Ucluelet)
The SoLow is Ian Kennington from Ucluelet, whose modular ambient production harkens to the early 90s classic era of ambient (The Orb, Aphex Twin, Global Communications), but with a contemporary twist. He's been performing live over the internet for years and Wonderment debuted his first in-person live set last year, which turned out to be one of the highlights of the 2018 season.
https://soundcloud.com/user-470275837/exhale-remix

JP MELDRUM
JP Meldrum is a prolific artist, probably best known for his work with Formidable Licorice. He is no stranger to ambient, however, and brings a diverse confluence of influences to the genre.
https://soundcloud.com/formidableliquorice/passerby-is-an-angel

Banfield Park is located at 521 Craigflower Road and is easily accessed via the Galloping Goose Trail (if coming to Vic West by the Selkirk Trestle, make a right just off the bridge) or the Bus Route #14. Banfield Park has a children's playground and plenty of space, however, it's not guaranteed that the Vic West Community Centre adjacent to the park will be open. The nearest washrooms would be those found just south of the Selkirk Trestle on the Galloping Goose between Central Spur Road and Regatta Landing, or those at the Spiral Cafe at 418 Craigflower Road. Bring sunscreen and water and pack-it-in, pack-it-out! Please be mindful that Banfield Park is subject to CRD Bylaws prohibiting both smoking and vaping in the park.

Wonderment is supported by the BC Arts Council, the Capital Regional District, the City of Victoria, Long & McQuade, Modo Carshare Co-op, Metropol and Sunbelt Rentals.