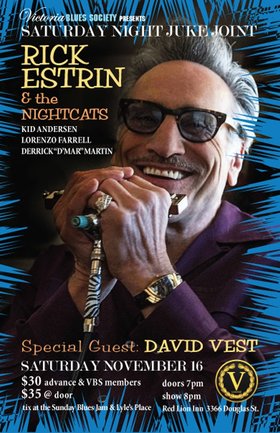 Music: Jazz / Blues
Overflowing with talent and bursting with bravado, Rick Estrin & The Nightcats have created one of the blues’ most instantly recognizable sounds and no-holds-barred styles. With the world-class talents of harmonica master, songwriter and vocalist Rick Estrin, guitar wunderkind Chris “Kid” Andersen, keyboard wizard Lorenzo Farrell and dynamic drummer Alex Pettersen, Rick Estrin & The Nightcats serve up sharp and incisive original blues and gritty roadhouse rock ‘n’ roll.
With his wily and unforgettable original songs and his hipster, street-smart vocals, no one on the blues scene writes or sings like Rick Estrin. No one looks like him either, as Estrin is always dressed to the nines, sporting his trademark pencil-line mustache and pompadour haircut. DownBeat says, “Rick Estrin sings and writes songs like the brightest wiseguy in all of bluesland and blows harmonica as if he learned at the knee of Little Walter.” Live, the band is simply unbeatable. They deliver a high-energy show capable of bringing any audience to its feet. According to Living Blues magazine, they play “captivating, powerful blues and roots rock with a wickedly cool and otherworldly twist on tradition....Intelligently conceived and executed…hugely entertaining."
GROOVIN' IN GREASELAND features 13 original songs, 11 by Estrin (including one co-write with Andersen) and one each by Andersen and Farrell. The band's dazzling performances bring the songs to life as richly detailed characters spill their secrets and share their stories. One listen makes it clear that this is one of the tightest and most original groups in any genre, constantly inspiring each other to new heights. Groovin’ In Greaselandwas produced by Andersen and Estrin and recorded at Andersen’s soon-to-be legendary Greaseland Studio in San Jose, California.
For more info see http://www.rickestrin.com