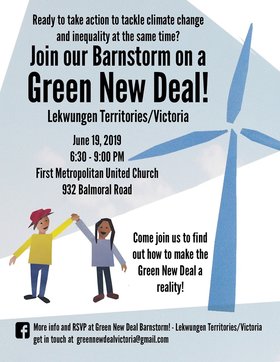 Music:
We had a town hall, now it's time to organize!

We are holding a mass organizing meeting to make a Green New Deal a reality in Lekwungen and W̱SÁNEĆ territories. We have a plan for how to get there. Come take concrete action, and start building the future we want to see here in our own communities. Even if you weren’t at the town hall we still want you there.

At the barnstorm we will be splitting into breakout groups which will organize on themes that came up at the town hall, and on building popular support for the Green New Deal.

The Green New Deal is a bold vision for tackling climate change and inequality at the same time. That means totally re-organizing our economy to run on 100% renewable energy, creating millions of jobs, respecting the rights, title, and sovereignty of Indigenous Peoples, and enshrining dignity, justice, and equity for all.

These are the groups we have confirmed so far:

📋 Canvassing and leafleting
Asking the general public to pledge to support a Green New Deal and get more people involved. We need to inspire as many people as possible about what a Green New Deal could look like.

📣 Political pressure
Lobby politicians at all levels to support a Green New Deal, organize debates in the leadup to the election, organize actions at your representative’s office, etc.

⚒️ Labour Outreach (with the Greater Victoria Teachers' Association)
Get your union to endorse a Green New Deal! We will give you the tools and information you need to do it.

🌊 Stopping Trans Mountain (with Rise and Resist)
We heard at the town hall that stopping fossil fuel expansion needs to be part of a Green New Deal. Plug into that here.

We will update with more breakout groups as they are confirmed!