The Sooke Philharmonic Orchestra under the direction of Yariv Aloni, Music Direc...

Felix Mendelssohn’s The Hebrides (Fingal’s Cave) was inspired by the composer’s excursion in 1829 to the Scottish Hebrides islands, famous for basalt sea caves. The work includes musical themes that suggest the stunning beauty of sea caves, feelings of the area’s remoteness, solitude and the power of crashing waves.

Franz Schubert completed his Symphony No.4 in 1816, when he was 19 years old. However, it was not publicly performed until 1849, many years after his death in 1828. The work is called the Tragic Symphony, possibly because the first movement delivers a spirit of sorrow and resignation. This tragic theme is not maintained however, in later movements which include more animated and entrancing melodies.

The Winds of Summer concert offers Sooke and West Shore residents the exceptional opportunity to experience live classical music in their “own backyard”.

The SPO offers FREE concert admission to youth and children under 18, making attendance a unique and affordable family outing. Hearing first hand great music from the past centuries, played with skill and obvious joy, encourages young people to expand their musical interests and to begin a life-long appreciation of the classics. 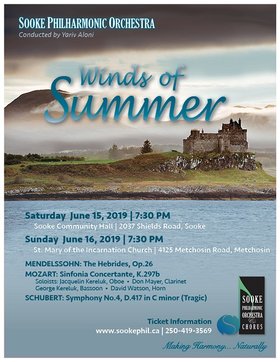