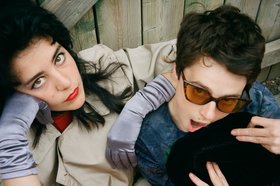 LEMONGRAB
"Attache ta tuque!" These girls kicked off the band with a punk vision and a raw sound that never left. Inspired by bands such as Delta-5, Lemongrab is bringing back a lo-fi sound and energy. Now with five members, you can expect post-punk and psych qualities to their sound. It’s groovy and sometimes scary, it’s a caress followed with slap making you want more.
• lemon-grab.bandcamp.com •

FEVER FEEL
Hailing from Victoria BC, Fever Feel is an oblique classé rock and roll group whose music stylings are informed by early psychedelic rock, vintage country music, laid back greenwich village folk sounds and a touch of poetic mysticism. Formed in 2014 by brothers Landon Franklin and Logan Gabert in Calgary AB, the band took to touring throughout North America in their early days. Writing and recording on off times in between brought forth the bands first offering, a self-titled LP released September 2018. Since then, the band has begun releasing a new series of odds and ends singles entitled ‘The Less Precious Collection’.
• feverfeel.bandcamp.com •

Ora Cogan is a multi-disciplinary artist and singer-songwriter based in Victoria B.C. She is known for her singular voice and cinematic compositions. While migrating between several cities and towns over the past decade, she has released seven albums and toured extensively throughout Europe and North America. Cogan has collaborated with a multitude... more info
Submit info on this show to our admins