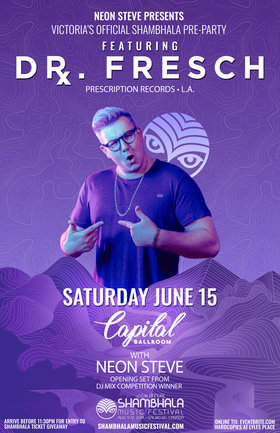 Get ready for the 22nd Annual Shambhala Music Festival with the Official Shambhala 2019 Pre-Parties. Each pre-party will give you a chance to win a ticket to #Shambhala2019, so dust off those tickle trunks and join your city with some warm up Shambhavibes on the dancefloor!

Festival tickets are nearly sold out but are still available at https://tickets.shambhalamusicfestival.com/

**Arrive BEFORE 11:30PM for entry to win a free Shambhala Festival ticket**

Hardcopies will be available at Lyles Place SOON**

In 2013 after winning Insomniac’s Discovery Project Contest, Tony Fresh launched the Dr. Fresch brand. His debut self titled EP and innovative hip hop/rap remixes exploded in the blogosphere and Dr. Fresch was subsequently featured at #9 on Billboard Magazine’s “Next Big Sound” Chart.

Dr. Fresch has continued to gain serious momentum over the course of the last year. With releases on OWSLA and Ministry of Sound, and over 30 million plays on SoundCloud, Dr. Fresch has quickly solidified himself as one of the most unique emerging dance music artists. His signature “Future Ghetto” brand weaves together elements of house, hip hop/rap, and trap to create a unique, forward thinking sound.

Dr. Fresch is currently at work on his house and hip hop/rap blended four track follow up original EP due to release in April 2018.