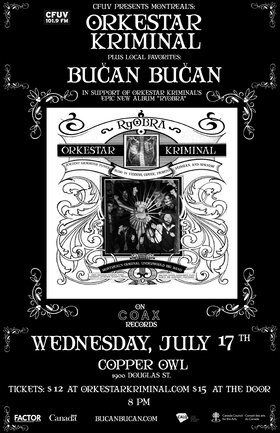 Music: Country / Bluegrass / Rockabilly, Folk / Celtic / Latin / World, Pop / Rock / Indie
Tickets: $12 in advance, $15 at the door*
Orkestar Kriminal
Orkestar Kriminal is comprised of 5 male and 5 female improv performers who interpret inspired renditions of slum-based "world music". They sing gutsy and adventurous criminal songs from a dangerous and forgotten era, like Mexican tequila-smuggling tunes, Russian prisoner laments, and the grooves of a Yiddish gangster. They can also be found performing in Pashto, Greek, Hebrew, or whatever other tongue might attract the multilingual stylings of front woman Giselle Claudia Webber. So long as the tune is catchy and a little shady, they'll give it their best shot. Orkestar Kriminal's debut album "Tummel" was released in 2015, attracting a plethora of media attention, and winning a GAMIQ for "Roots Album of the Year". After continuous touring and a multitude of festival performances, the biggest criminal punks in world music have just unleashed their 2nd full-length: Ryobra , with Producer Josh Dolgin, released August 24th, 2018 on Coax Records. In December, 2018 Ryobra hit the #1 spot on the Earshot “National International” college radio charts.
http://www.orkestarkriminal.com

Bučan Bučan
Made up of a very colourful and talented collection of musicians playing trumpets, violins, clarinets, tubas, accordions, trombones and drums, Bučan Bučan has been entertaining crowds for the last five years with its variety of traditional, eastern European brass band tunes and original material inspired by Balkan rhythms and melodies.

This high energy group is mobile and often plays while moving around a venue, indoors or outside, making use of the different features of performance spaces while giving their audiences an up close and personal experience with live music. Alternately, the band is just as comfortable on a nightclub stage playing to a packed dance floor.
https://bucanbucan.com