DISNEY’S THE LION KING JR. COMES TO SOOKE Amber Academy is prepared for this ...

With music and lyrics by Elton John and Tim Rice, the 60-minute musical is designed for school aged performers and is based on the Broadway production directed by Julie Taymor and the 1994 animated Disney film. The Amber Academy cast contains approximately 40 students aged 4-16 led by acting instructors Drew Kemp and Leighanne Georgeson, with another 20+ students working behind the scenes to pull she show together.

“We’re very excited about this project”, says Executive Director Keli Dunn. "It’s going to be an amazing experience, not only for the audience and the students performing in the show, but also for the students from our other classes who have been working on the other essential components of the production. Expect to see some fantastic costumes created by our costumes & fashion design students and some outstanding scenery and props, including beautifully elaborate masks that have been created by our art students. Our Stage Sound & Sonics students will oversee the technical side of the production including sound, lighting, and special effects.”

The Lion King JR. tells the story of the epic adventures of a curious cub named Simba as he struggles to accept the responsibilities of adulthood and his destiny as king. Along the way, the young lion encounters a colorful cast of characters including spunky lioness Nala, charismatic meerkat Timon, and loveable warthog Pumbaa. To claim his rightful place on the throne and save his beloved Pridelands, Simba must find his inner strength and confront his wicked Uncle Scar. The Lion King JR. features classic songs from the 1994 film such as “Hakuna Matata” and the Academy Award®-winning “Can You Feel the Love Tonight” as well as additional songs penned for the Broadway production.

“Amber Academy was a very fun experience last year!”, exclaims nine-year old Maia James, who played a lead character of Uncle Travelling Mat in the 2018 musical, Fraggle Rock-a-Thon. James plays the role of “Rafiki” in The Lion King JR. “I’ve made lots of friends (at Amber Academy) and have learned a lot, like how to sing better. The teachers are great and I am so excited for The Lion King JR.!”

Tickets on sale at:
Sooke Shoppers Drug Mart, online at http://www.amberacademy.ca/events, or by phone at (250) 888-1921, limited tickets also available at the door.

More information about Amber Academy Youth Fine Arts Society can be found at http://www.amberacademy.ca and you can also follow them on Facebook and Twitter
Physical tickets at: Sooke Shoppers Drug Mart 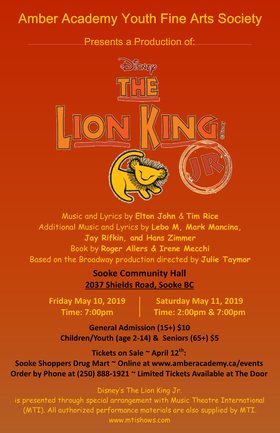