As you’re reading this there’s a rental 8’ softtop likely being pounded into the Tofino sand bearing the name “Gnarfunkel”. Have you ever seen this board? Probably not. Have you heard of the band that named itself after this board? Probably not. But they’re returning to the island to attempt to surf and figured they might as well play a show in Victoria on the way. Its called The Gnar Magic Tour as they’re bringing their good buds Bad Magic. They'll be joined by bedroom pop star Yung Heazy fresh off a far-reaching world tour. Starting off the night will be local darling Lindsay Dixon of Flawed Hearts and the Waiting Room. Come down for a night filled with rock and roll, bad magic and songs about the ocean.

Yung Heazy (Vancouver) ~ http://www.instagram.com/yung_heazy/
A bedroom pop star born overnight online after his first releases racked up millions of streams, Yung Heazy aka Jordan Heaney released his highly anticipated debut LP “Whenever You’re Around I Hate Everything Less” on June 1st 2018 and has been on the road non stop in North America, Europe, Mexico and Asia since.
Drawing comparisons to acts like Mac Demarco, The Beatles and the current wave of lofi pop acts Yung Heazy’s music melds psych and pop with endearing lyricism and harmonies.

Bad Magic (Vancouver) ~ http://www.instagram.com/badmagicmusic
Armed with an engaging high energy live show and intricate, thoughtfully crafted songs - Bad Magic not only wants to get you moving to the rhythm but leave you with a lingering feeling that you were in the right place at the right time. With absolutely nothing to hide and plenty to show for their time together, they wear their tricks on their sleeves and aim to please based on the simple fact that there is magic in the moment and it’s up to all of us to capture it. 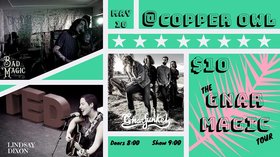