Submersive Tribe and Subscript is proud to present... GRIME!! Get lost in ...

Submersive Tribe and Subscript is proud to present...

Get lost in the concrete jungle with us as we give to you one of the heaviest line-ups! We have local legends Pigeon Hole gracing our stage as well as MYTHM's Victoria debut and grime pioneer D Double E! Setting the vibe for the night is one of our own tribe members, SIDEWAY.

Graphics will be provided by INEO Studios

In honour of Orrie Falesau, we will be offering a Donation Tier ($25) for those who wish to contribute to his family's GoFundMe campaign. We will donate $10 for every Donation Tier ticket sold.

There will be Orilla and Pigeon Hole Merch available at the merch booth and 100% of the proceeds will be donated to the fund.

If you wish to contribute more, please follow this link to the GoFundMe page:

Vancouver Island duo Pigeon Hole first forged their name in the underground hip hop culture of the mid-2000’s. From there, the drive to experiment with new forms of production saw them splinter off from rap onto the fringes of the bass music scene. True to their roots, Pigeon Hole’s sound leans heavily on nostalgic reference to their early hip hop influences; establishing themselves at the forefront of Canada’s Bass music scene with their new approach to the genre.

Pigeon Hole (Lee Napthine and Colin McCue) got their start as members of west coast hip hop collective Sweatshop Union. Years on the road led into the summer of 2011, where the group toured the bass music festivals, and were exposed to a new array of genres and sounds. The decision was made to cut ties with Sweatshop Union and head back into the studio to redefine themselves excited by the many forms of electronic music they had been inspired by. The 2013 LP ‘Chimp Blood’, on Urbnet Records, was Pigeon Hole's first dip into electronica and played to their strengths as lyricists and performers. The albums anthemic singles, ‘Champion’ and ‘Higher State’, brought a refreshing voice to the rap world, and introduced a group in the infant stages of discovering it’s new sound.

Recently, a series of quality singles and EP’s on home-base label Sleeveless Records saw Pigeon Hole pick up where they left off with their brand of broken hip hop bass tunes, and dabble in the newly coined ‘Halftime’ Drum & Bass sub-sect. The 2017 sticky-analog single ‘Headnod’ on Saturate Records, and the G-funk inspired ‘6 AM’ on Gravitas, got international playlist support from DJ’s and were rinsed throughout the summer. Pigeon Hole fuelled momentum by touring North American festivals, highlighted by prime time slot performances at Shambhala, SXSW, and Burning Man’s Camp Questionmark Stage.

Pigeon Hole won’t stop there. They begin the new year at the front of the pack in an emerging bass music landscape. One in which they have secured a position as both pioneers of the past and innovators of an ever more promising future.

It's been almost two whole decades since D Double E, the former N.A.S.T.Y Crew MC and one of half of the iconic grime duo Newham Generals, first stepped onto the scene, debuting in jungle, but fans have seemingly been content with his rave-ready reload bars—and idiosyncrasies on singles—that having a full body of work is merely a hat-tip to his already legendary status. His latest LP, Jackuum!, is out now.

MYTHM is the unity of two progressive bass music producers, Strange Thing and Numatic. Residing in British Columbia, the two have contributed towards the growth of experimental bass music in the west coast. Having releases on respected labels such as Sound Museum, Sleeveless Records, Aufect Platinum, as well as performances at festivals such as Bamboo Bass, Electric Love and Burning man, the two combined have earned the respect and support from many.
Together the duo produces contemporary bass music characterized by a style that reaches the masses that are open to experimentation while incorporating analog and modular sound design into their production. Constantly creating, experimenting and learning more about their craft, the two are deeply rooted in the sound system culture. With the understanding of the hardcore continuum, they express the utmost respect towards the foundation of sound.
Art has been second nature to the two for most of their lives. It’s the air they breathe and the spark that motivates them. This same spark is what led them to their passion for the creation of music. The three years for Strange Thing and two years for Numatic have been a journey of self-reflection and musical attunement. Their art has taken many forms over the years and is out of a shared enthusiasm towards music, the two have developed their relationship with one another personally and professionally.


The result of these two creative minds merging into one has brought a new level of inspiration and creative freedom within their production. What started as two individual artists collaborating has quickly evolved into the birth of MYTHM. The evolution of their entities as Strange Thing and Numatic has progressed into what they see as their best and most inspired work to date.

Electronic music has many flavors and this Aussie-born Canadian bass music producer has savored each and every one of them over the years.
Breaking the genre barrier is what SIDEWAY is all about, featuring an eclectic mix of underground electronica, trap and rap. His set lists are carefully curated and his mixes are almost always freestyle ensuring he always match the vibe. One thing is for sure, they are guaranteed to make your ears take note!
Brass, strings and instruments of all nature feature seamlessly fusing the old with the new in a bass heavy, synth driven, vocal rich, booty grooving vibration station

from Nanaimo BC
Unknown

Submersive Tribe is a production company and studio space - we offer an incubato...
Open / Operational 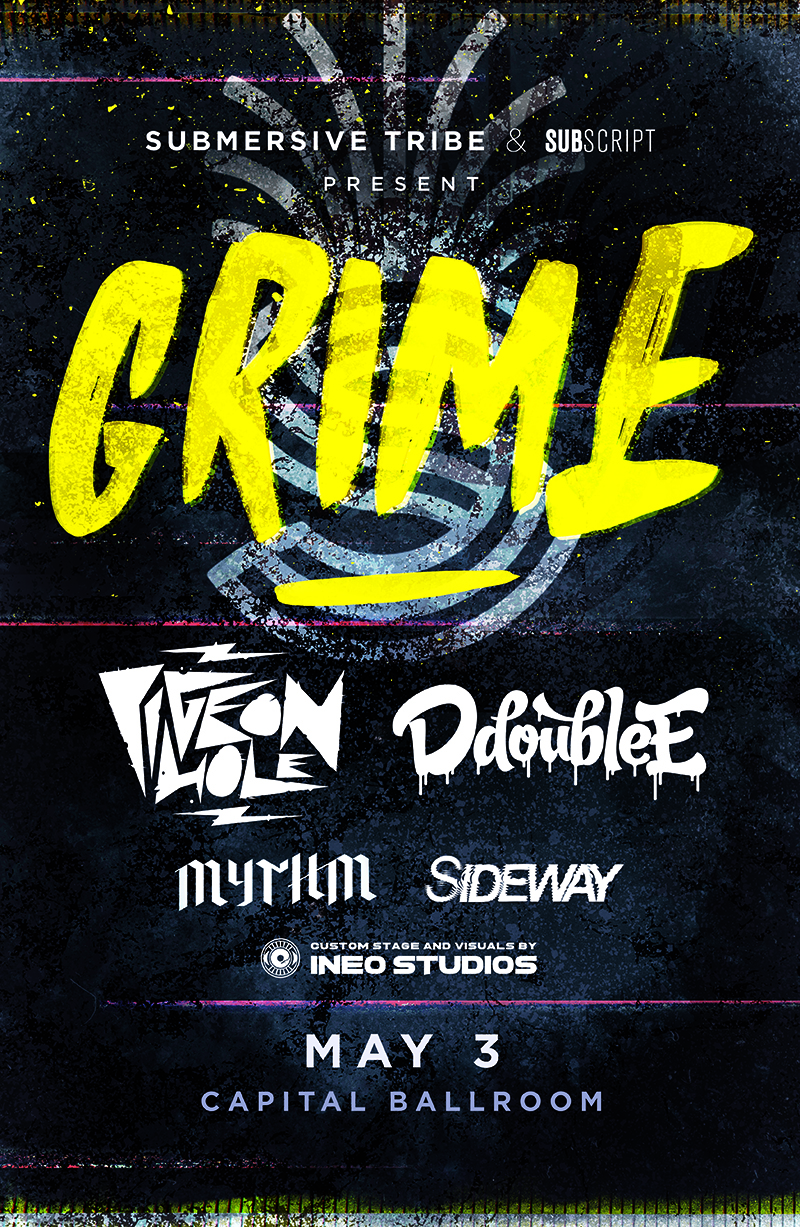